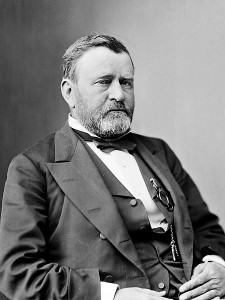 It was on this date, April 27, 1822, that the 18th President of the United States, Ulysses Simpson Grant, was born Hiram Ulysses Grant in Point Pleasant, Ohio. As commanding general of all the Union armies during the American Civil War, Grant brought to a close a bloody chapter in 19th century American history. At the close of the War, he was the most popular man in the country. He was elected president and served two terms, from 1869-1877. Although he was a strong supporter of civil rights for Southern citizens of African descent, his administration was marred by a tolerance of corruption, so that he left office as unpopular as he was popular when first elected. His bid for a third presidential term in 1880 was unsuccessful.

Grant was, however, a staunch defender of church-state separation, saying in his Memoirs, "No political party can or ought to, exist when one of its cornerstones is opposition to freedom of thought. If a sect sets up its laws as binding above the state laws, whenever the two come in conflict, this claim must be resisted and suppressed at any cost." Grant also believed church property ought to be taxed. In a speech in Des Moines, Iowa, in 1875, he unequivocally supported public schools over religious schools, saying,

The free school is the promoter of that intelligence which is to preserve us as a nation... I predict that the dividing line will not be Mason's and Dixon's, but between patriotism and intelligence on one side, and superstition, ambition and ignorance on the other... Encourage free schools, and resolve that not one dollar of money be appropriated to the support of any sectarian school... Leave the matter of religion to the family altar, the Church, and the private schools, supported entirely by private contributions. KEEP CHURCH AND STATE FOREVER SEPARATE."

In his final days, a Rev. Dr. Newman hovered over him like a buzzard, unsuccessfully trying to convert Grant before he died. As he lay unconscious on his deathbed, as often happens to skeptics and freethinkers, Newman baptized Grant without his permission. Grant awoke suddenly, so the story goes, and announced that he was "surprised" that such a liberty had been taken. He may have used a stronger word.

Grant penned his excellent Personal Memoirs of U.S. Grant, the sale of which was to save his family from destitution, while dying of throat cancer. The Memoirs sold over 300,000 copies, earning Grant’s family over $450,000, and the praise of Mark Twain, Matthew Arnold and (later) of Gertrude Stein. The cancer claimed him on 23 July 1885, just a few days after the manuscript was finished.

Lombroso was an outspoken Atheist and materialist, and became an honorary associate of the British Rationalist Press Association.