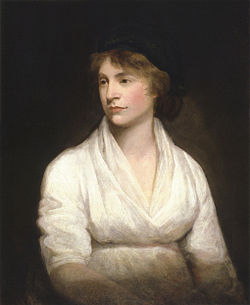 It was on this day, April 27, 1759, that English feminist and radical Mary Wollstonecraft was born in Hoxton, near London, of Irish parents. She was largely self-educated and an unusual student, with the radical idea that women should be educated on a par with men. Escaping her abusive father after the death of her mother, Wollstonecraft opened a school in Newington Green with her friend Fanny Blood, whom she met in 1775. The school closed within two years and Fanny married, but Wollstonecraft found she had a talent for writing, and publishers to promote her, so she published her theories in Thoughts on the Education of Daughters (1786).

Her social ideas were even more unconventional. Wollstonecraft argued that to obtain social equality society must rid itself of the monarchy as well as the church and military hierarchies, which prompted one critic to describe her as a "hyena in petticoats." Her friend Fanny later died in childbirth in Lisbon, while Mary was hurrying to nurse her, but on her return to London, Wollstonecraft began working for publisher Joseph Johnson, reading manuscripts, writing articles and translating. She continued to argue that the rights of men and the rights of women were the same rights. This culminated in her Vindication of the Rights of Woman in 1792, challenging Rousseau's notions of female inferiority as found in his novel Émile. This work was the seminal document in the history of modern feminism. "It is, however, sufficient for my present purpose," wrote Wollstonecraft,

to assert that, whatever effect circumstances have on the abilities, every being may become virtuous by the exercise of its own reason; for if but one being was created with vicious inclinations... what can save us from atheism? or if we worship a God, is not that God a devil? (Vindication, Chapter 2)

Wollstonecraft associated with a radical intellectual group including Thomas Paine, William Godwin (with whom she was unimpressed) and Swiss-born painter Henry Fuseli, for whom she developed a fondness. Resisting temptation for the time, she traveled to Paris to observe the French Revolution firsthand, became close to many of the Revolution's leading political figures, and wrote, in 1794, her History and Moral View of the Origins and Progress of the French Revolution. While there, she became involved with the American soldier and writer, Gilbert Imlay, and although they posed as man and wife, she never married him. The following year, Mary gave birth to her first daughter, whom she christened after her late friend, Fanny.

Returning from a Scandinavian assignment for Imlay, only to find him in yet another infidelity, Wollstonecraft attempted suicide, but was rescued and returned to London a changed woman. She found William Godwin again and fell into marriage, although both opposed the institution, in 1797. Her husband was a Christian-turned-atheist (though later a Pantheist) and likewise Wollstonecraft wrote her many books and pamphlets, including her 1790 answer to Edmund Burke, A Vindication of the Rights of Man, with a strong rationalist-humanist stance. Like her friend before her, Wollstonecraft died of complications associated with childbirth. Ten days after she gave birth to the future author of the classic novel Frankenstein, Mary Wollstonecraft died of puerperal fever, on 10 September 1797.

"It would be safe to say that I'm agnostic." Matthews says. "I think it's very ignorant to say, 'Well, for everything, God has a plan.'"