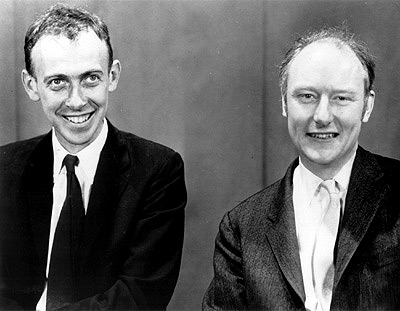 It was on this date, April 25, 1953, that James D. Watson and Francis Crick published an article in Nature magazine describing the structure of DNA in terms of the now-familiar double helix. Watson was working at the Cavendish Laboratory, University of Cambridge, in early October 1952. He met Francis Crick there and they agreed that, working together, they should be able to discover the structure of DNA that had eluded others.

Crick brought to the project his knowledge of x-ray diffraction, while Watson brought knowledge of phage and bacterial genetics. In April 1953 they jointly published their theory, complete with a diagram of "two helical chains coiled round the same axis." Watson (age 25 at the time), was born in Chicago; Crick (age 36 at the time), was born in Northampton, England. Crick earned his doctorate the year after the double helix paper; Watson three years before publication.

True scientists both, they characterized their discovery as a scientific theory, meaning that their assertion is not only subject to independent verification, but also innately falsifiable. A theory is simply an explanation, or set of explanations, that describes how nature works. Science itself presupposes a regular order to nature and assumes there are underlying principles or laws at work, and that these laws are relatively constant — otherwise there would be no point in trying to understand nature!

In this sense, science differs from pseudoscience, or religion masquerading as science, such as Creationism or Intelligent Design. In pseudoscience, the conclusion comes first, cannot be tested or falsified, cannot be used to make predictions, and does not rely on regular, underlying natural laws. It is not that science is atheistic, but that it doesn't rely on supernatural causes to explain natural events. No scientific theory can be proved with absolute certainty. Only religious dogma can claim perfect truth. Perhaps the less you know, the more you think you know.

In 1996 Richard Dawkins interviewed James Watson for a film broadcast by the British Broadcasting Corporation. Watson said of humanity, "I don't think we're for anything, we're just products of evolution. You can say 'Gee, your life must be pretty bleak if you don't think there's a purpose' but I'm anticipating a good lunch." Dawkins later wondered if Watson knew many scientists with strong religious convictions. "Virtually none," said Watson. "Occasionally, I meet them and I'm a bit embarrassed because I can't believe that anyone accepts truth by revelation."

Likewise, Francis Crick. A materialist is one who accepts that all reality is material, not spiritual. An early 1995 CNBC interview with Crick was prefaced by a quote from his then-released book, The Astonishing Hypothesis (1994), a book about the mystery of consciousness explained in scientific terms. In Crick's words, "The Astonishing Hypothesis is that You, your joys and your sorrows, your memories and your ambitions, your sense of personal identity and free will, are in fact no more than the behavior of a vast assembly of nerve cells and their associated molecules."

James Watson and Francis Crick: Their discovery won them both, with Maurice Wilkins, the Nobel Prize in Physiology or Medicine in 1962. Their worked paved the way for the mapping of the Human Genome, completed in 2000.

In an earlier age, a Deist of Pope's beliefs would have been tried and either burned or hanged for impiety. Today, no longer having the power to do that, they embrace him as a "Catholic poet."