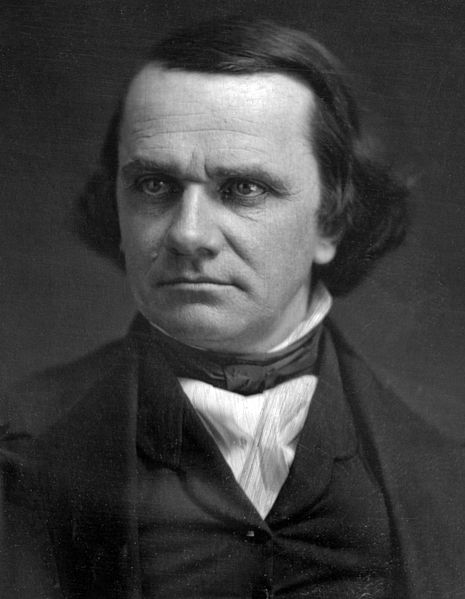 It was on this date, April 23, 1813, that American statesman and jurist Stephen A. Douglas was born. Douglas was nicknamed the “Little Giant” for his combination of small stature and adroitness at politics. He was a lion in the US Senate and was chiefly responsible for the Compromise of 1850 that tried but failed to settle the issue of slavery. The Kansas-Nebraska Act which followed four years later, following Douglas’s deeply held democratic belief that the people should decide for themselves, and thus allowing new states to choose on the issue of slavery, spawned a protest movement that became known as the Republican Party.

Democrat Douglas engaged in a series of seven famous debates with Republican Abraham Lincoln during the Illinois US Senate election campaign of 1858. Douglas won the Senate seat, but Lincoln later became President. And Douglas, true to his character, urged the South to reconcile themselves with his election. (It is a little-known fact that Douglas briefly courted the future wife of Abraham Lincoln, Mary Todd.) But his states-rights approach to the question of slavery ultimately put Douglas on the wrong side of history. In a 3 March 1854 speech to the U.S. Senate he said, “Abolitionism proposes to destroy the right and extinguish the principle of self-government for which our forefathers waged a seven years’ bloody war, and upon which our whole system of free government is founded.”

Douglas, who served in both the House and the Senate, distinguished himself with both his rhetorical eloquence and his defense of religious liberty. And although Douglas believed in God, his obituary noted that he “never identified himself with any Church.” He argued vociferously to preserve the Union, but Stephen A. Douglas died shortly after the start of the Civil War, on 3 June 1861. It was Stephen A. Douglas who said, in his last public speech before his death, “There are only two sides to this question. Every man must be for the United States or against it. There can be no neutrals in this war; only patriots and traitors.”

It was on this date, March 27, 1839, that the future 14th Premier of New Zealand, John Balance, was born in Mallusk, County Antrim, in Northern Ireland. Interested in books as a youth, he eventually became interested in politics. But, having witnessed the damage caused by religious rioting when in Belfast, Ballance also became committed […]