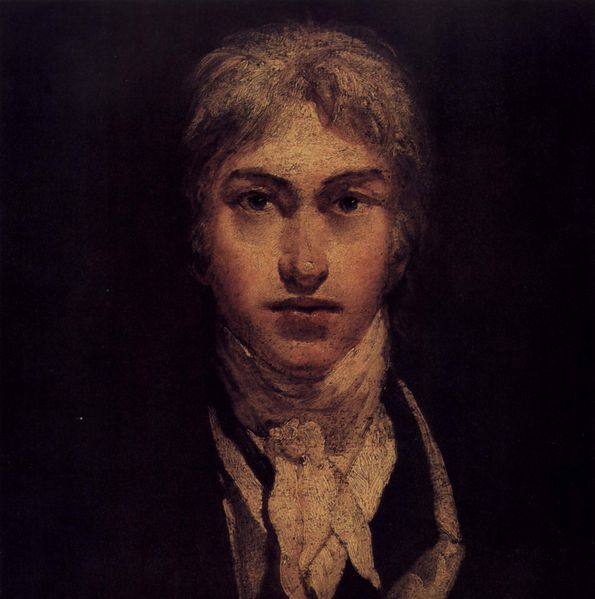 It was on this date, April 23, 1775, that the English landscape painter Joseph Turner was born Joseph Mallord William Turner in London. Though poor, he contrived to get himself educated, took up painting, and was rewarded with having one of his works exhibited at the Royal Academy of Art when he was just 14 years old. At age 15 he had his first watercolor exhibited (A View of the Archbishop's Palace, Lambeth); by age 21 his first oil painting (Fishermen at Sea) a nocturnal moonlit scene of The Needles, off the Isle of Wight, which made him a darling of art critics. By age 27 he was a full member of the Academy. Turner was known as “the painter of light,” whose work anticipated Impressionism. He traveled widely in Britain and throughout Europe—including Venice and Switzerland, but also studying at the Louvre in Paris. His friend and supporter, art critic John Ruskin, described Turner as the artist who could most “stirringly and truthfully measure the moods of Nature.”

Painting to the last, his final exhibition was in 1850. J.M.W. Turner never married, but did have a relationship with an older widow, Sarah Danby, with whom he may have had two daughters in the early 1800s. His own father worked with him as artist’s assistant for three decades, until the older man’s death in 1829. The senior Turner’s death led the younger man to bouts of depression and his few close friends noted increasing eccentricity in Turner’s behavior as he grew older. At the end of his life, Turner left a large fortune to support impoverished artists (what he called “decayed artists”). Although a commemorative stained glass window was added in his memory at St. Mary’s Church, Battersea, in the late 20th century, Ruskin, who knew him, called Turner “an infidel” in religion. One biographer said Turner “did not profess to be a member of any visible Church,” and another regretted that he “had no religious hope to cheer him” when he died. The artist died in the house of his mistress, Sophia Caroline Booth, in Chelsea, on 19 December 1851. His body was interred, at his request, at St. Paul’s Cathedral. It is said the last words of Joseph Mallord William Turner were, “The Sun is God.”