Inherit the Wind Opens on Broadway (1955)

He that troubleth his own house
Shall inherit the wind.
—Proverbs 11:29 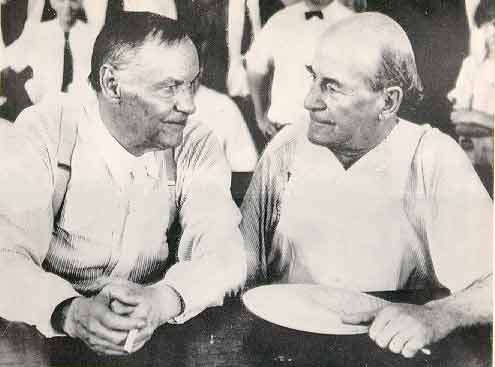 It was on this date, April 21, 1955, that Inherit the Wind, the play by Jerome Lawrence and Robert E. Lee dramatizing the famous Scopes "Monkey Trial" of the summer of 1925, opened at the National Theatre on Broadway. The original cast included Ed Begley, Sr. in the role of Matthew Harrison Brady (based on creation defender William Jennings Bryan) and Paul Muni in the role of Henry Drummond (based on evolution defender Clarence Darrow).

After a resounding success in Dallas, where Inherit the Wind opened on January 10, New York producer-director Harold Shumlin brought the production to the New York stage and enticed Muni out of retirement to play the Drummond role. The play repeated its box office success and inspired the 1960 Stanley Kramer film — starring Spencer Tracy as Drummond and Fredric March as Brady.

It is a mistake to take Inherit the Wind at face value, as a clash between two pop stars of the 1920s (Clarence Darrow and William Jennings Bryan) or even solely as a clash of cultures, intellectual vs. religious. The 1950s were a time of cultural anxiety and anti-intellectualism in the US, brought on by the crusade of Joe McCarthy in the Senate and his colleagues on the House Un-American Activities Committee. Arthur Miller had his own success with a play of a similar nature, The Crucible, two years earlier, and the fear among liberals and Socialists that government could crush freedom of thought with political orthodoxy was perhaps equaled by the fear of conservatives and fundamentalists that divergence from the one true religion would lead the nation into a political and moral hell.

Of course Inherit the Wind is not an accurate reflection of history, but that is beside the point of 1950s didactic theater. The play was meant to be biased toward a particular point of view: it was meant to persuade as well as to move. And although the playwrights mock the William Jennings Bryan character, they are really focused on defending freedom of thought in a time of anti-communist hysteria. They have Drummond say to the jury,

Yes there is something holy to me! The power of the individual human mind. In a child's power to master the multiplication table there is more sanctity than in all your shouted "Amens!," "Holy, Holies!" and "Hosannahs!" A idea is a greater monument than a cathedral. And the advance of man's knowledge is more of a miracle than any sticks turned to snakes, or the parting of waters. [...] Gentlemen, progress has never been a bargain. You've got to pay for it. [...] Darwin moved us forward to a hilltop, where we could look back and see the way from which we came. But for this view, this insight, this knowledge, we must abandon our faith in the pleasant poetry of Genesis.

A careful reading of the text of Inherit the Wind reveals a more nuanced Darrow character: as he leaves the courtroom for the last time, after losing the case, but demolishing the Bryan character, Drummond takes both the Bible and Darwin with him in his briefcase. Audiences have understood this ever since Inherit the Wind opened on Broadway on this date in 1955.

"It has taken nearly 2000 years for the married woman to get back that personal independence which she enjoyed under the later Roman Law, but lost through the influence which Christianity exercised on European legislation. And it may be truly said that she regained it, not by the aid of the churches, but despite the opposition."