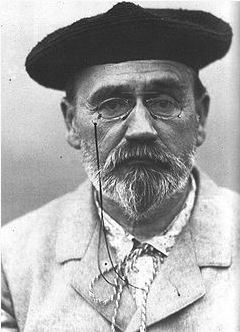 It was on this date, April 2, 1840, that the French novelist Émile Zola was born in Paris. He worked in a publishing house before his exceptional writing skills were recognized ... but only after he reached age 31. It was in 1871 that his Rougon-Macquart cycle (1871-1893), which reached 20 volumes, caught on with the public. His later novels strongly attacked the Catholicism in which he was reared, and in his novel La Terre he gives the nickname Jésus-Christ to a reprehensible character.

Baptized a Catholic, but a disciple of Voltaire from his earliest days, and an atheist all his adult life, Zola profited from his writings and his naturalistic novels depicted the darker side of French life. But he was at the same time a sincere idealist. Perhaps that is why the Catholic Church in France hated him. When the clericals accused him of simply making money off of "immoral books," he retorted by exposing the hypocrisy of the Church in a trio of novels set in Lourdes, Rome, and ecclesiastical Paris.

In J'accuse, the 1898 open letter to the President of France, for which he is chiefly remembered, Zola openly accused the military of injustice in the 1894 conviction of the Jewish Captain Alfred Dreyfus, on charges of giving military secrets to the Germans. Though the charges were false, they were supported by the Catholic Church. Zola was summoned to stand trial in the Palais de Justice at Paris to answer a charge of libel.

Zola argued that Dreyfus had been framed, and he had the facts on his side, including testimony from members of the military itself. But his defense of the officer, then imprisoned at Devil's Island, stuck a finger in the eye of French anti-Semitism. Zola was convicted for libel. He appealed and lost, so, to avoid imprisonment, which would have prevented him from further defending Dreyfus, he fled to England. His J'accuse, and his idealism, cost Zola his hard-won place on the roll of the Legion of Honor. And only after his efforts had forced the Dreyfus case to be reopened did Zola feel it safe to return to France.

The Dreyfus Case—dramatized in the 1937 film The Life of Emile Zola, starring Paul Muni—precipitated a drastic separation between Church and State in France, and permanently embittered Zola against the Church. "Civilization will not attain to its perfection," wrote Zola, "until the last stone from the last church falls on the last priest."

Dreyfus himself lived until 1935. Émile Zola died of accidental asphyxiation 33 years earlier, on 28 September 1902, four years before Captain Dreyfus was finally cleared. At Zola's funeral, his friend Anatole France declared, "He was a moment of the human conscience."

Crisp once quipped, "a woman in the audience stood up and said, 'Yes, but is it the God of the Catholics or the God of the Protestants in whom you don't believe?'"