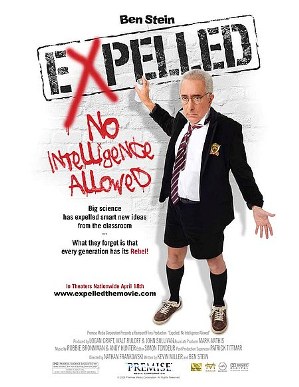 It was on this date, April 18, 2008, that the documentary film Expelled: No Intelligence Allowed was released in the United States. Winner of the 2009 Faith and Freedom Award, actor and co-writer Ben Stein hosts the debate as one between the proposition that life on earth was the design of some unnamed intelligent designer vs. the theory that life evolved through undirected, natural processes. He charges that several academics have been “expelled” for challenging “Big Science” on the issue of Intelligent Design vs. Evolution, that is, for daring to take the Intelligent Design side.

If Expelled were an honest documentary, Stein and his production team would have interviewed those claiming to have been expelled, then looked for documentary evidence that this was directly as a result of a denial of academic freedom, then found those responsible for the expulsions and wrested an on-camera explanation from them. But they do not even attempt to do this – they pretty much take it on faith. Worse than that, the very premise of the film is biased: if anybody can be said to have been “expelled” for trying to get a hearing for Intelligent Design, the reason would not be denial of free speech or stifling of academic freedom: the reason would be as simple as scientists failing to actually do science!

The “expelled” are Richard Sternberg, Guillermo Gonzalez, Caroline Crocker, Robert Marks, Pamela Winnick and Michael Egnor. Expelled claims Richard Sternberg was “ruined” in 2004 for publishing a pro-Intelligent Design article as volunteer editor of a small academic journal. In fact, nothing serious happened to him in spite of violating policy in publishing a paper without peer review. Expelled claims Guillermo Gonzalez was denied tenure for espousing Intelligent Design. In fact, he was denied tenure because he failed to publish much and what he did publish looked like a lazy professor’s work. Expelled claims Caroline Crocker was fired for mentioning Intelligent Design in a college classroom. In fact, although she taught outside the curriculum and students complained about her, Crocker was allowed to finish her contract as a visiting lecturer, under which she had no employment guarantee. Expelled claims Robert Marks had his Baylor University website shut down for espousing Intelligent Design. In fact, it is entirely appropriate for a science department not to host a website they consider unscientific – and Marks moved his free speech to another server. Expelled claims Pamela Winnick was “blacklisted” as a journalist for endorsing Intelligent Design. In fact, this is patently untrue – the worst that can be said is that her colleagues gave her book on the subject a negative review. Finally, Expelled claims Michael Egnor was viciously attacked for claiming that medical doctors need not study Evolution. In fact, he claimed this in a blog posting and perhaps has little experience with reader comments on the Internet. It seems that Ben Stein and his production team have failed to state a claim for which relief can be granted.

If Expelled were an honest documentary, and Intelligent Design really is a scientific theory rather than a religious doctrine, then Stein and his production team would have done two things: (1) they would have stayed far away from pointing out the atheism of several high-profile evolutionary scientists, such as Professor Richard Dawkins, and (2) they would have identified the Intelligent Designer. They do not even attempt to do this. And not only is Evolution tied to Nazism, Communism, eugenics and abortion, but the film harps on the atheism of Intelligent Design’s enemies, and even goes so far as to point out the word “Creator” in the Declaration of Independence.

Not only are the film’s points over-dramatized – no word or phrase goes unemphasized by a film clip that accentuates the negative – but all comparisons are routinely overblown. There are examples such as comparing Intelligent Design advocates to breakers of the Berlin Wall (illustrated by film clips), or comparing academia to Stalin and Hitler (apparently unaware of their incompatible ideologies), or Evolutionists to eugenicists (as Ben Stein visits the Nazi mass sterilization facility at Hadamar). Apparently, being Jewish is sufficient qualification for Stein to speak authoritatively on the Holocaust, and immunizes him from criticism of his conclusions.

One of the funniest moments in the film is how one of the Intelligent Design advocates finessed the 2005 “Dover School District” decision. In which not only did ID get a well deserved legal drubbing as a “theory” but the dishonest religious motivations behind it were clearly exposed. This advocate shrugged it off, saying court cases don’t matter!

But here is what does matter: If this were an honest documentary, and Stein and his production team were sincere in their assertion that Intelligent Design is a competing theory to Evolution and deserving of debate in academia, they would have spent at least a few of this film’s 90 minutes giving us an idea of what the Intelligent Design theory actually explains. Expelled does not state a theory for Intelligent Design, or raise one testable claim, or identify the Designer. Who is he? The question assumes the answer is a “who” and not a “what.” Even if we admit an Intelligent Designer, then what? There’s no need for science! Intelligent Design is a science stopper!

Expelled is, from main title to end title, only a heavy-handed criticism of Evolution. If I wanted to convince people that my book is the Great American Novel, then, instead of letting everybody read, it I spent all my time vilifying its detractors, should I be surprised that nobody takes me seriously? Expelled: No Intelligence Allowed portrays itself as a voice crying in the wilderness. It is instead an insincere, factually challenged polemic in the form of a whiny complaint. Expelled should have been called, “No Intelligence Displayed.”

W.P. Kinsella (1935) It was on this date, May 25, 1935, that Canadian novelist W.P. Kinsella was born William Patrick Kinsella in Edmonton, Alberta. A writer of baseball fiction, Kinsella's bestselling 1982 novel, Shoeless Joe, was made into the very successful 1989 motion picture Field of Dreams, starring Kevin Costner and James Earl Jones. Kinsella […]