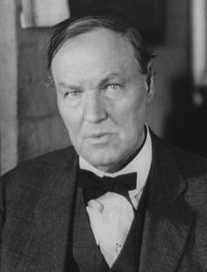 It was on this date, April 18, in 1857, that the American trial lawyer Clarence Darrow was born Clarence Seward Darrow in Kinsman, Ohio. He grew up in the working class, attended public school, and was called to the bar in 1878 at the age of 21. In 1902 President Theodore Roosevelt appointed him an arbitrator in the Pennsylvania anthracite coal strike. Up until 1925, his two most famous cases included one in which he defended organized labor against predatory industrial owners backed by the states and the courts — a leveling of power sorely needed in the anti-union early 20th century. His defense of Big Bill Haywood for murdering the former governor of Idaho, in the 1907 Haywood trial, was a masterpiece of both litigation and rhetoric. Haywood was acquitted after an 11-hour closing argument by Darrow.

After World War I, Darrow defended war protesters charged with violating state sedition laws. 1924 saw his next famous case, in which he saved Nathan Leopold and Richard Loeb from execution — they received prison instead — for the murder of 14-year-old Robert Franks. While Darrow believed everyone deserved a competent defense, his motivation was not to free murderers but to protest executions, which he believed barbaric and unjust. His twelve-hour long summation to save his clients' lives stands as the most eloquent attack on the death penalty ever delivered in an American courtroom.

It was in 1925 that Darrow came in direct contact with the conflict between religion and reason when he defended Tennessee science teacher John T. Scopes for violating the Butler Act, passed earlier in the year, that made it a crime to teach the theory of evolution or, as Darrow put it, "for the crime of teaching the truth." Scopes was convicted, but the world read of and listened to the famous "monkey trial" and Dayton, Tennessee, became a circus. During the trial, he said, "I do not consider it an insult but rather a compliment to be called an agnostic. I do not pretend to know where many ignorant men are sure — that is all that agnosticism means."

Clearly, Darrow was an unabashed skeptic about God and religion. At an event in Kansas City, Missouri, shortly before he died, publisher E. Haldeman-Julius reported that Darrow said,

Do you, good people, believe that Adam and Eve were created in the Garden of Eden and that they were forbidden to eat from the tree of knowledge? I do. The church has always been afraid of that tree. It still is afraid of knowledge. Some of you say religion makes people happy. So does laughing gas. So does whiskey. I believe in the brain of man. I'm not worried about my soul."

It was on this date, October 10, 1959, that American actress, comedian and author Julia Sweeney was born in Spokane, Washington. From her start with the improvisational comedy troupe The Groundlings, Sweeney was discovered in 1989 by “Saturday Night Live” producer Lorne Michaels and became a featured player on the TV show from 1990 to […]