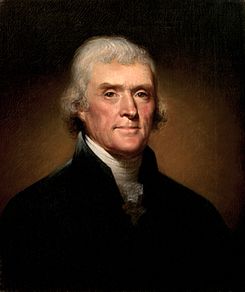 It was on this date, April 13, in 1743, that the author of the Declaration of Independence and the Virginia Statute for Religious Freedom, Thomas Jefferson, was born the son of a wealthy farmer in Shadwell, Virginia. Jefferson received a superior education and read the law, which was the 18th century equivalent of going to law school, with the greatest law teacher in Virginia. He practiced law from 1767 to 1774, when he joined the American Revolution.

He served in the Revolutionary Continental Congress, during which he was selected to draft the Declaration of Independence. Jefferson served as minister to France, where he rubbed shoulders with skeptical French intellectuals, as George Washington's Secretary of State, and as Vice President to John Adams — before being elected Third President himself from 1801 to 1809.

Jefferson and Adams were poles apart politically, but both were advanced skeptics regarding religion. While he was president, Jefferson wrote his most famous statement in a letter to the Danbury Baptist Association, a religious minority in Connecticut opposed to taxation to support the majority Congregationalist Church.

Believing with you as I do that religion is a matter which lies solely between man and his God, that he owes account to none other for his faith or his worship, that the legitimate powers of government reach actions only, and not opinions, I contemplate with sovereign reverence that act of the whole American people which declared that their Legislature should 'make no law respecting an establishment of religion, or prohibiting the free exercise thereof,' thus building a wall of separation between Church and State.

Jefferson had been the architect of the Act for Establishing Religious Freedom in Virginia which put an end there to the compulsory funding of so-called "established" churches. One often had to be a member of the "established" congregation in order to vote, own property or exercise other citizenship rights.

In this Act he urged, "no man shall be compelled to frequent or support any religious worship, place, or ministry whatsoever, nor shall be enforced, restrained, molested, or burthened in his body or goods, nor shall otherwise suffer, on account of his religious opinions or belief; but that all men shall be free to profess, and by argument to maintain, their opinions in matters of religion, and that the same shall in no wise diminish, enlarge, or affect their civil capacities."

Thomas Jefferson was a Deist, but his statements regarding Christianity would not stand up in a court of law if he were charged with being a Christian. He described the doctrine of the Trinity as, "The hocus-pocus phantasm of a God like Cerberus, with one body and three heads, had its birth and growth in the blood of thousands of martyrs. ...[T]hat one is three, and three but one, is so incomprehensible to the human mind, that no candid man can say that he has any idea of it." [1]

On priestcraft Jefferson remarked, "History, I believe, furnishes no example of a priest-ridden people maintaining a free civil government. This marks the lowest grade of ignorance of which their civil as well as religious leaders will always avail themselves for their own purposes." [2]

And, in a letter to John Adams, written shortly before both their deaths, on 4 July 1826, Jefferson said, "The day will come when the mystical generation of Jesus, by the Supreme Being as his father, in the womb of a virgin, will be classed with the fable of the generation of Minerva in the brain of Jupiter."