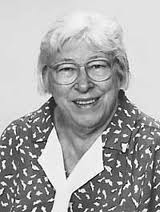 It was on this date, April 13, 1919, that American atheist activist, and founder of the organization American Atheists, Madalyn Murray O’Hair was born Madalyn Mays in Pittsburgh, Pennsylvania. Brought up in a Presbyterian family, Madalyn Mays enlisted in the Women’s Army Corps in World War II and was posted to Italy as a cryptographer. Though married herself, there she met and became involved with a married officer named William J. Murray. The two never married, but Madalyn called her son “Bill Murray,” and herself Madalyn Murray, through the time she completed her law degree at South Texas College of Law in 1952. Murray never passed the bar exam and never practiced law, but that did not prevent her from brining one case all the way to the Supreme Court.

She gave birth to her second son, Jon Garth Murray, on November 16, 1954, and the family settled in Baltimore, Maryland, in 1960. In that year, Murray filed a lawsuit against the Baltimore City Public School System because her son Bill was required to participate in Bible readings in his public school. When her son refused, he was subjected to bullying, and Murray charged that school policy violated the separation clause of the First Amendment of the US Constitution. Joined with a similar case (Abington School District v. Schempp), the Murray v. Curlett lawsuit reached the Supreme Court of the United States. In 1963, the Court voted 8-1 for Murray’s argument, effectively banning school-sponsored, coerced prayer and Bible verse recitation in public schools. This court victory rewarded Murray with the epithet, “The Most Hated Woman in America,” a title she relished.

Murray left Maryland in 1963 and, in 1965, she married U.S. Marine Richard O’Hair, taking his name but soon separating from though not divorcing him. Eventually moving to Austin, Texas, O’Hair founded American Atheists, which she described as “a nationwide movement which defends the civil rights of non-believers, works for the separation of church and state and addresses issues of First Amendment public policy.”

In 1980, son William Murray, the center of the school prayer court case, converted at a Baptist church in Dallas and became a preacher. O’Hair repudiated her son “entirely and completely for now and all times.” Though her second son, Jon Garth Murray, became president of American Atheists in 1986, O’Hair remained nominally in charge. She adopted her granddaughter Robin Murray O’Hair, daughter of Bill Murray. It is reported that she was a domineering personality and the O’Hair enjoyed exercising power over all who came within her reach.

An Atheist loves himself and his fellow man instead of a god. An Atheist thinks that heaven is something for which we should work for now – here on earth – for all men together to enjoy. An Atheist believes that a hospital should be built instead of a church. An atheist believes that deed must be done instead of prayer said. An atheist strives for involvement in life and not escape into death. He wants disease conquered, poverty vanished, war eliminated.”*

Furthermore, said O’Hair, in explaining what atheism is:

Atheism may be defined as the mental attitude which unreservedly accepts the supremacy of reason and aims at establishing a lifestyle and ethical outlook verifiable by experience and the scientific method, independent of all arbitrary assumptions of authority and creeds.

But people ... don't even know what atheism is. It’s not a negation of anything. You don’t have to negate what no one can prove exists. No, atheism is a very positive affirmation of man’s ability to think for himself, to do for himself, to find answers to his own problems. I’m thrilled to feel that I can rely on myself totally and absolutely; that my children are being brought up so that when they meet a problem they can’t cop out by foisting it off on God. Madalyn Murray’s going to solve her own problems, and nobody’s going to intervene. It’s about time the world got up off its knees and looked at itself in the mirror and said: “Well, we are men. Let’s start acting like it.”

On August 27, 1995, Madalyn Murray O’Hair, her son Jon Garth Murray, and her granddaughter Robin Murray O’Hair, were kidnapped by a member of the American Atheists, David Roland Waters. It was not until January 2001 that it was learned through his confession that Waters and his accomplices had kidnapped all three, forced them to withdraw large sums from the American Atheists treasury, and then murdered them. Waters led authorities to the mutilated bodies, buried on a Texas ranch.

Clearly, it was not the vengeance of God that brought to a brutal end the life of the world’s then most famous atheist on September 29, 1995. It was the love of money. But Madalyn Murray O’Hair left an enduring legacy in the 1963 Supreme court decision that – although constantly misrepresented as banning prayer from schools – correctly reasoned that respect for church cannot be coerced by representatives of state.