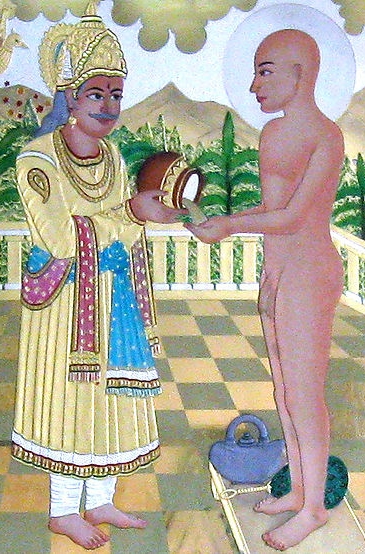 It was on this date, April 12, 560 BCE, by tradition, that the most famous leader of Jainism, Mahavira (Sanskrit महावीर) was born. He was born with the name Vardhamana (वर्धमान), which means "increaser," but acquired from his followers the Hindu descriptive title, Mahavira, which means "Great Hero."

Mahavira was born a prince in Bihar, India (where Buddhism also was founded). Legend has it that Mahavira was conceived by Devananda, but the gods, ingeniously, transferred the embryo to the womb of Trisala. It is said that the expectant mother had sixteen auspicious dreams before the child was born. Astrologers interpreting these dreams, predicted that the child would be either an emperor or a saint. At age 30 Mahavira left his family and royal household, gave away everything he owned, and became a monk.

Mahavira was not the founder of Jainism: he was the 24th and the last Tirthankara or saint of the religion, and the only one historically verifiable. In his travels, Mahavira organized a brotherhood of monks, who took vows of celibacy, nudity, self-mortification, and fasting. He counseled respect for all living things, recommended the ascetic lifestyle and aloofness from the world, along with nonviolence and a strict vegetarianism. That nudity part caused a split in the sect, but some Jain nudists remain in the warm climate of India.

Mahavira was a contemporary of Buddha, and the Jain religion has many similarities. Like Buddhism, Jainism arose in reaction to the ritualism of the Hindu religion. Both borrowed elements from the Sankhya school of philosophy, which was a compromise between the atheistic Lokayata school and the theistic Vedanta school. Neither was, in the beginning, meant to be a religion. Mahavira's followers established monastic communities seven or eight centuries before Christianity got the idea. Yet, Jain monasteries never developed the vices and corruption of their Christian copies.

Principally, the goal of the Jain is to attain transcendence, that is, to move out of the vicious cycle of birth, death, life, pain, and misery. However, the existence of God is irrelevant to Jain doctrine, making Jainism the oldest atheistic religion. Mahavira believed that the universe was self-sustaining and did not have a beginning. Instead, he believed the universe endless and that it operates according to natural law. Mahavira was, in fact, an atheist.

The year of Mahavira's birth is a matter of some conjecture: some put it as long ago as 615 BCE, some as late as 540. Tradition says he died at age 72, so he may have died as early as 543 or as late as 468. But the philosophical descendants of Mahavira, as often happens, turned his atheistic ethic into the supernaturalist religion we find mostly in India today.