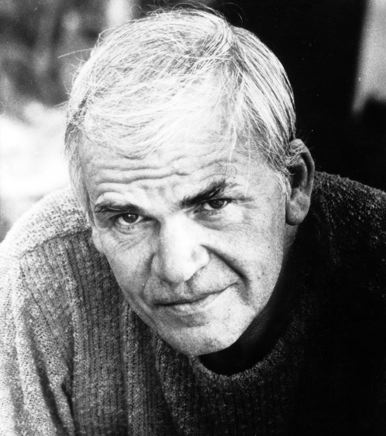 It was on this date, April 1, 1929, that the Czech-born French novelist best known for The Unbearable Lightness of Being, Milan Kundera was born in Brno, Bohemia (now the Czech Republic). Growing up in post-Nazi Czechoslovakia, Kundera and his generation were highly influenced by the totalitarian realism of the occupiers, which may have persuaded the budding writer and film student to join the Communist Party in 1948, while a teenager. But his intellect was too precocious for the Party and he was expelled two years later. He graduated from Charles University, Prague, in 1952, then was appointed lecturer in world literature at the Film Academy there.

Kundera rejoined the Communist Party in 1956 but, along with other Czech artists and writers such as Václav Havel, became a leader of the 1968 Prague Spring, in the naïve hope that the Communists would ease their yoke. Instead, pro-Soviet forces crushed the movement and Kundera was again expelled from the Party two years later (1970). All the time, Kundera was writing: his first novel, The Joke, was published in 1967, followed by such books as Life is Elsewhere (1969), The Book of Laughter and Forgetting (1979), for which he lost his Czech citizenship, The Art of the Novel (1988), in which he discusses his disbelief in organized religion, Slowness (1994) and Identity (1998). But it is for his 1984 novel, The Unbearable Lightness of Being, filmed in 1988, that Kundera is chiefly known.

Since 1975 Kundera has lived in France with his wife Vera; he became a French citizen in 1981. Although praising the revolutionist and Encyclopedist Denis Diderot, Kundera admits that political struggle between right and left leaves him cold. In a 1985 interview, he said:

The danger that threatens us is the totalitarian empire. Khomeini, Mao, Stalin - are they left or right? Totalitarianism is neither left nor right, and within its empire both will perish. I was never a believer, but after seeing Czech Catholics persecuted during the Stalinist terror, I felt the deepest solidarity with them. What separated us, the belief in God, was secondary to what united us. In Prague, they hanged the Socialists and the priests. Thus a fraternity of the hanged was born.*

His country of birth belatedly remembered him: In 2007, Kundera was awarded the Czech State Literature Prize. Three years later, he was made an honorary citizen of his hometown, Brno. It is Milan Kundera who said,

The proliferation of mass graphomania among politicians, cab drivers, women on the delivery table, mistresses, murderers, criminals, prostitutes, police chiefs, doctors, and patients proves to me that every individual without exception bears a potential writer within himself and that all mankind has every right to rush out into the streets with a cry of "We are all writers!" The reason is that everyone has trouble accepting the fact that he will disappear unheard of and unnoticed in an indifferent universe, and everyone wants to make himself into a universe of words before it's too late.**