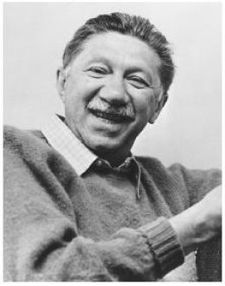 It was on this date, April 1, 1908, that American psychologist Abraham Harold Maslow was born in Brooklyn, New York, the son of Russian-Jewish immigrant parents. His lightly educated parents encouraged him to study law, but Maslow abandoned that curriculum, and the state of New York, to study psychology at the University of Wisconsin-Madison. There he earned his BA (1930), his MA (1931) and his Ph.D (1934). He returned to New York and taught at Brooklyn College, then later, where he was named Chair of Psychology in 1951, at Brandeis University.

Maslow is chiefly known for founding humanistic psychology and proposing the "hierarchy of needs"—to be met so an individual can achieve "self-actualization." In this hierarchy there was room for religion, and even supernaturalism, but it was not a necessity for the highest level: self-actualization. Indeed, in the introduction to his Religion, Values and Peak-Experiences (1964), Maslow warns against the mystical pursuit of personal salvation as a basically selfish pursuit that frequently turns evil. Rather than being concerned with the abnormal and the ill, Maslow wanted to know what constituted normal or positive mental health. He seems to have been influenced by thinkers as wide-ranging as Einstein and Lao Tzu (the Father of Taoism).

His own ideas on religion can be inferred from his naming as Humanist of the Year by the American Humanist Association in 1967. He once said, “The sacred is in the ordinary, in one's daily life, in one's neighbors, friends, and family, in one's backyard.” Maslow died in Menlo Park, California, on 8 June 1970. It was Abraham Maslow who said, “We need not take refuge in supernatural gods to explain our saints and sages and heroes and statesmen, as if to explain our disbelief that mere unaided human beings could be that good or wise.”*

* Description of Maslow's views by Richard J. Lowery in A H. Maslow: An Intellectual Portrait (1973).