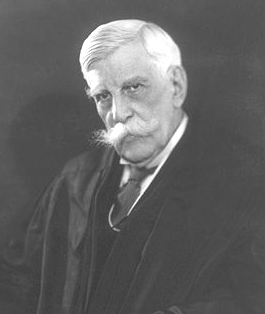 It was on this date, March 8, 1841, that The Great Dissenter on the US Supreme Court, Oliver Wendell Holmes Jr., was born in Boston, Massachusetts. His father was the prominent writer and physician Oliver Wendell Holmes, Sr. (1809-1894) and his mother an abolitionist, during a time when the abolition of slavery was 22 years and a Civil War in the future. The younger Holmes served in the Massachusetts Militia and survived battles at Antietam and Fredericksburg.

While at Harvard Law School, Holmes met his future best friend William James, who was studying medicine. The two saw Europe together, “But while James went on, continuing in Germany his search for the meanings of the universe, Holmes decided that ‘maybe the universe is too great a swell to have a meaning,’ that his task was to ‘make his own universe livable,’ and he dove deep into the study of the law.”[1] During his early legal career, Holmes practiced admiralty law and commercial law in Boston. In 1882, Holmes sat on the Supreme Judicial Court of Massachusetts; seven years later, Holmes became Chief Justice of the same court. During this time, Holmes developed a moderately pro-labor point of view, but largely respected legal precedent. In 1902, Holmes was appointed by President Theodore Roosevelt to a seat on the United States Supreme Court and unanimously confirmed. He would spend the next 30 years on the Supreme Court with great distinction.

His distinction as The Great Dissenter arose from many legal dissents issued on the Supreme Court that nevertheless were incorporated into common law. For example, about truth being the fruit of a combat of ideas and the power of the “sweeping command, ‘Congress shall make no law...abridging the freedom of speech,’” Holmes wrote (in dissent):

To allow opposition by speech seems to indicate that you think the speech impotent, as when a man says that he has squared the circle, or that you do not care whole-heartedly for the result, or that you doubt either your power or your premises. But when men have realized that time has upset many fighting faiths, they may come to believe even more than they believe the very foundations of their own conduct that the ultimate good desired is better reached by free trade in ideas – that the best test of truth is the power of the thought to get itself accepted in the competition of the market, and that truth is the only ground upon which their wishes safely can be carried out. That at any rate is the theory of our Constitution.[2]

Associate Justice Holmes resigned from the Supreme Court on 12 January 1932. He died in Washington, DC, on 6 March 1935, just shy of his 94th birthday. Throughout most of his legal life, his religious opinion can be said to have been Unitarian. It was Oliver Wendell Holmes Jr., the eminently quotable writer, who said to a reporter on his 90th birthday, “Young man, the secret of my success is that at an early age I discovered that I was not God.”[3]