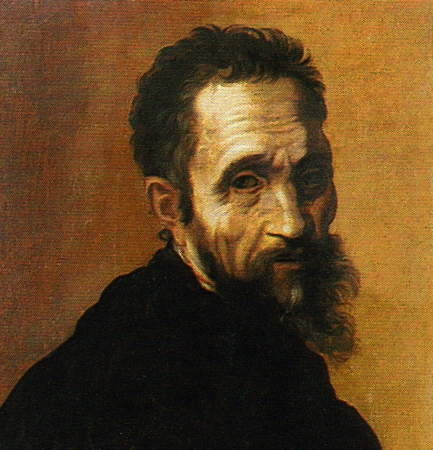 It was on this date, March 6, 1475, that Italian Renaissance sculptor, painter, and architect Michelangelo was born Michelangelo di Lodovico Buonarroti Simoni in Caprese, Tuscany. He was interested in art – that is, painting, sculpture and architecture – from a young age. Michelangelo had a Humanist education, and was exposed to the Platonic school of philosophy, which may have informed his philosophy of the ideal when he said, “Good painting is nothing else but a copy of the perfections of God and a reminder of His painting.” Early on, his talent was recognized and he was employed by many famous clerics and political families, most notably the Medici's, Pope Julius II (dramatized in the 1965 film, The Agony and the Ecstasy), and Pope Leo X (another Medici).

It is desperate to argue that his faith must have been deep or he could not have painted such beautiful frescoes The Creation of Adam (1512) and The Last Judgment (1541), his Pietà (1499) and David (1504). Almost all of his artistic subjects were religious, true, but then the only employers for his talent were clerics and churches. The artist was arrogant with his employers and demanding and perfectionist in his art, which has to mean that art superceded faith in Michelangelo’s life. That the artist had any religious faith at all, in the absence of a direct confession, is only an assumption.

To Michelangelo, art followed nature, even if he spoke of nature in religious language: “My soul can find no staircase to heaven unless it be through earth's loveliness,” he once said. And elsewhere, “It is therefore indisputable that the limbs of architecture are derived from the limbs of man.” Michelangelo achieved great fame and a comfortable income by the end of his long career. He died at Rome on 18 February 1564, but by his own wish was buried in his beloved Tuscany. The Catholic Encyclopedia, while praising his morality, industry and artistic talent, can find no words to describe his religious faith.

I also leave my religion to Dr. Cutts Barton… hereby empowering the Sub-Sacrist to strike him on the head when he goes to sleep in church… I leave the Reverend Mr. Catcott some little of my free thinking, that he may put on spectacles of reason and see how vilely he is duped in believing the scriptures literally.