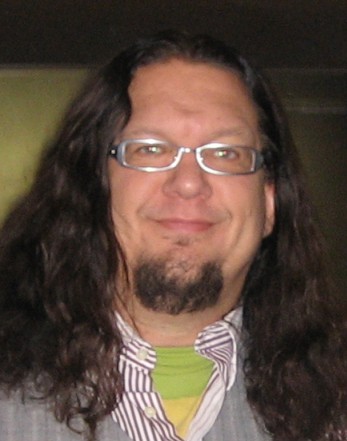 It was on this date, March 5, 1955, that magician and author Penn Jillette, the speaking half of the comedy/magic team Penn & Teller, was born Penn Fraser Jillette in Greenfield, Massachusetts. In 1975 he found his partner, Teller (Raymond Joseph Teller), who is 5'9" (175 cm), compared to Jillette's 6'6" (182 cm) frame. The Penn & Teller "arranged marriage," as they call it, has them performing regularly "an edgy mix of comedy and magic involving knives, guns, fire, a gorilla and a showgirl" at the Rio All-Suite Hotel & Casino in Las Vegas and appearing on the Showtime cable series "Penn & Teller: Bullshit!" exposing frauds and fakes such as talking to the dead, alternative medicine, creationism, alien abductions and ESP. They also write books: Cruel Tricks for Dear Friends (1989) and How to Play with Your Food (1992), and Jillette's first novel, Sock (2004).

Both Penn and Teller are outspoken Atheists and skeptics. They even use it as part of their act. On this, Jillette remarks, "We lose a couple a night from the blasphemy. I never comment, people don't even notice. No one cares. Good riddance to bad xtians [sic], I say."[1] Indeed, in interview after interview, Jillette is unwavering and solidly scientific about his freethinking. In a 1999 interview for The Onion, Penn wryly remarked:

... being pro-science is one of the oddest things you can do in show business. ... Oh, Western medicine doesn't work; I'm sorry, we cured polio. What more do you want? Your herbalism has done jack; we cured polio. And guess what? It cures polio even if you don't believe in it. We don't have it on Earth anymore. And then there's also smallpox ... But we [Penn & Teller] are pro-science, and when you're pro-science, that means you're an atheist, by definition, because religion... No matter how much they put "10 Top Scientists Talk About Why They Believe In God" on the cover of TIME magazine, you kind of have to look and go, "How come these 10 top scientists are all teaching at community colleges?"[2]

In another interview, Jillette was asked if his Atheism turned people off:

I suppose so, although the U.S. was built on the marketplace of ideas. ... I am an atheist, a very strong atheist, and yet I will go hear Garth Brooks even though he is Christian. I do see art by people with different political beliefs, and I do read books by people with different theological and political beliefs. I don't see hardcore hateful propaganda like The Passion of the Christ, but something that is thought out and not people-hating, I will go check out. I don't think the American ideal is a kind of safe, white bread mediocrity. You are supposed to hear from people you disagree with. That is the way we grow and get better.[3]

In discussing his novel, Sock, with Reason magazine, Jillette remarked:

People who know about Penn & Teller know that I'm an atheist. Because of that, I find myself getting into these discussions at two o'clock in the morning in a diner, people asking the usual questions about atheists: "How can you be moral? Don't you wish there were a god?" Then, at some point, they'll ask, "How do you feel with the death of a loved one?" As I wrote Sock, it turned out that I was writing an answer to that question. How does an atheist deal with really deep grief?

When you boil it down, I think it becomes a cliché. But the book is about how love and memory and humanity are really what we have to hold on to. More important, that's kind of enough.

People have to realize that having an imaginary friend may be dangerous. When 9/11 hit, the second thing I said to myself was, "This really is what religious people do." Those people flying the plane were very good, very pious, truly faithful believers. There's no other way to paint them. Of course, they are extremists by definition, but they certainly aren't going against Islam in any real way.[5]

Jillette spoke about faith and Jesus in a 2004 interview:

People tend to use the word faith as if it's a good thing and it often is. ... [But if] you're talking about it in terms of Allah taking care of me in the next life for being a martyr and, therefore, I will fly the planes into the Twin Towers, I don't know how you can justify that as a good thing.

Finally, Jillette explained the difference between faith and freethought:

As a skeptic, we're not saying, "this is the way it is;" we're saying, "this is the evidence that we have right now." I will promise you that when evidence comes in differently I'm the first one to change. If you show me evidence of a God, I'm not an atheist. Atheism only means that I don't believe in God. I don't believe a God is impossible, I just don't think there is evidence of one.[7]