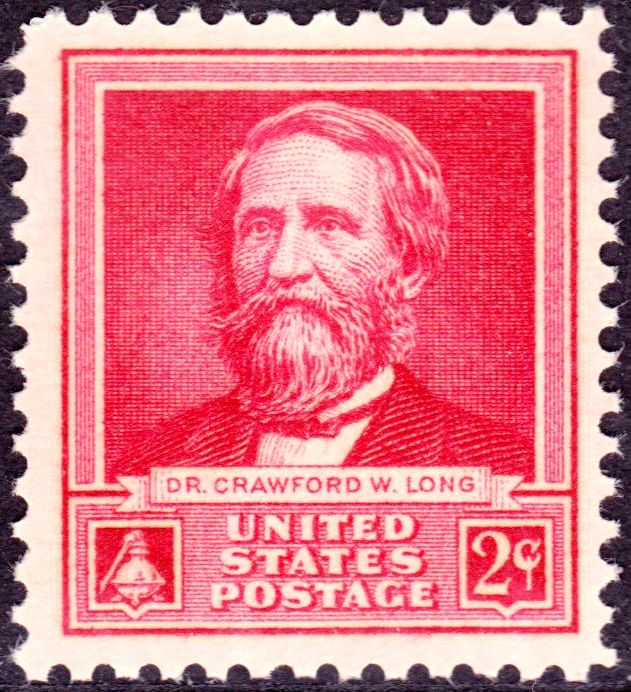 It was on this date, March 30, 1842, that ether (discovered in 1275) was first used as an anesthetic during surgery by Dr. Crawford W. Long of Jefferson, GA. The controversy over the use of anesthetics has a sad history of clerical opposition, especially when suggested for women in childbirth. The clerical prohibition issues from the Bible, Genesis 3:16, and from the very mouth of God: "Unto the woman he said, I will greatly multiply thy sorrow and thy conception; in sorrow thou shalt bring forth children."

Although anesthetics were known to ancient civilizations, the practice of drugging people before operating on them was discontinued during the Middle Ages, the period of strongest Church influence. Up to 1846, opium and alcohol were the principle agents used in diminishing the pain of operations, yet these anesthetics as often caused death as they did pain relief. Surgical operations were understandably infrequent and of short duration! Yet half century passed between the discovery of the anesthetic effects of ether and chloroform and their widespread clinical use.

As A.D. White summarized it in his brilliant Warfare of Science with Theology, "As far back as 1591, Eufame Macalyane, a lady of rank, being charged with seeking the aid of Agnes Sampson for the relief of pain at the time of the birth of her two sons, was burned alive on the Castle Hill of Edinburgh." In 1847, James Young Simpson, a Scots physician, advocated the use of chloroform as an anesthetic in obstetrical cases. This idea was denounced from pulpits across the land as impious and contrary to Holy Writ: clergymen accused Simpson of attempting "to avoid one part of the primeval curse on woman."

But Simpson knew his Bible and pointed to Genesis 2:21: "And the Lord God caused a deep sleep to fall upon Adam, and he slept: and he took one of his ribs, and closed up the flesh instead thereof;" thereby demonstrating that God used anesthesia.

In the early 1840s, Dr. Crawford Long had noticed that fashionable young people were experimenting with substances such as nitrous oxide, otherwise known as laughing gas, at parties. People under the influence of this gas literally felt no pain, so Long began to experiment with a similar substance, sulfuric ether. On March 30, 1842, he used it surgically for the first time to remove a tumor from the neck of a boy.

In 1853, Queen Victoria allowed the administration chloroform during the birth of her eighth child, Prince Leopold. Thus anesthesia was legitimized — so even the opposition of the Catholic hospitals of Dublin had to stifle their theology-based dissent — and anesthesiology has even developed its own specialty in the medical arts. When science advances, the churches retreat, then claim they never stood in the way in the first place.

Heine's works carry many caustic references to religion — and a warning: "Wherever books will be burned, men also, in the end, are burned.