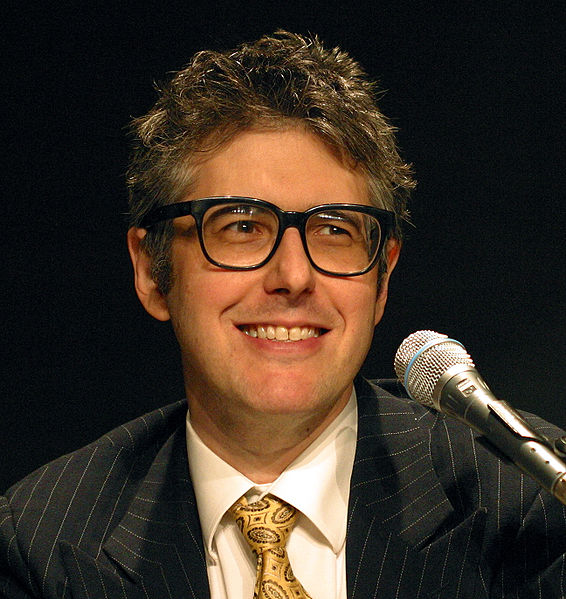 It was on this date, March 3, 1959, that radio host Ira Glass was born in Baltimore, MD, into a conservative Jewish family. He is the son of a radio announcer and accountant, Barry Glass, and of psychologist and infidelity researcher Shirley Glass — and also cousin to the composer Philip Glass.

He attended Brown University, where he majored in semiotics — the study of signs and symbols and their use or interpretation. Glass began working in public radio in 1978 when he was 19, as an intern at the Washington Headquarters of National Public Radio. For 17 years, Glass worked, and did nearly every production job on nearly every NPR news show, including reporter and host on several NPR programs, such as "Morning Edition" and "All Things Considered."

Glass moved to Chicago in 1989. There he produced several documentary series about Chicago public schools and about race relations. In November of 1995, the show for which Glass is known as producer and host, "This American Life," made its debut on WBEZ, Chicago. In June 1996 the show went national on Public Radio International. Each week, "This American Life" takes a theme and looks at it from several different human interest angles. Under Glass's editorial direction, "This American Life" has won such honors for broadcasting and journalistic excellence as the Peabody and DuPont-Columbia awards and the Robert F. Kennedy Award.

He had help, of course, from people such as contributing editor Sarah Vowell, an Atheist — but not from God. Glass abandoned his belief in God as a teen, but says, "To this day, I feel very Jewish — I couldn't be anything but a Jew. But when I go to services, it's not clear why I should be there." In an after-dinner talk, held in January 2003, he asked Rabbi Aaron Petuchowski of Chicago, "Should I quit? If I don't believe in God, should I bother ever showing up to synagogue again? ... My dispute isn't which picture of God [to imagine], but whether God exists in the first place."* In a 14 December 2000 interview with Chicago Tribune staff writer Robert K. Elder, Glass was candid about his own Atheism:

I just find I don't believe in God. It just doesn't seem to be true, and no amount of thinking about it seems to make it true. It seems inherently untrue. And the thing that's hard about honing that position is, as a reporter, I've seen many times how a belief in God has transformed somebody's life. In all the ways I feel like you can witness God's work here on earth, I feel like I've seen that. I've met a lot of people — it's been the thing that's changed them, that's sustained them in a way that I wish I could believe. But I simply find I don't and I don't feel like it's something I have a choice about. I could pretend I believe a God exists, but the world seems explainable to me without it.

Glass went on to reminisce:

I remember, even when I was growing up a little kid, it all seemed, especially the Christian version — arbitrary. That the entire universe would be created, and the system that was set up was: you could actually lead a perfectly good life, and a life organized around good deeds and caring for others, and yet if you simply didn't accept Jesus himself, the Creator of the Universe would feel so vengeful about that you'd be condemned to an eternity of torture. It just seemed like a really weird system. Like what difference would it make to the Creator of Everything? The whole thing seemed really arbitrary. Even as a kid, I felt like, "Well, if that's the system: fine. I accept my damnation. I don't think it's a fair system. But fine." I just don't believe.**

* Quoted from "An Atheist in Synagogue?" column, "The Skeptic," by Cindy Sher, Associate Managing Editor for Chicago Jewish Community Online (Jewish United Fund), published 27 March 2003. The article recounts a January 2003 after-dinner talk entitled "God, Man and Radio," sponsored by the Brotherhood of Temple Sholom. ** The two-part quote is from the Celebrity Atheist Web site, which cites an interview (formerly) at this link.

Burt Lancaster (1913) It was on this date, November 2, 1913, that American actor Burt Lancaster was born Burton Stephen Lancaster, one of five children, in New York City. Lancaster had a tough life on the streets of New York and attended a Protestant church. There he was strongly influenced by its pastor and the […]