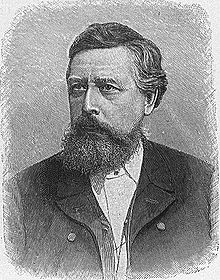 It was on this date, March 29, 1826, that the chief successor of Marx in Germany, Wilhelm Liebknecht was born Wilhelm Martin Philipp Christian Ludwig Liebknecht in Gießen, Germany. Orphaned at about age six, Wilhelm studied philology, theology and philosophy in Gießen, Berlin and Marburg, but he became attracted to student radicalism and decided to escape the authorities to the United States. On the train out of Germany, by chance he met the headmaster of a progressive school in Zurich. He changed plans and found himself teaching in Switzerland in 1847.

He reported on the Swiss civil war for a German newspaper, then heard of the 1848 revolution in France. Arriving too late to participate, Liebknecht joined a group in Paris on its way to Germany to start a little revolution there. Arrested in Baden and charged with treason, to his own good fortune, revolution erupted and a mob secured his release. The revolution failed, but Liebknecht escaped to Switzerland and became a leader in the Worker’s Association of Geneva. There he met Friedrich Engels. Arrested in Switzerland, he was banished from the country. He moved to London and remained there, becoming a member of the Communist League, from 1850 to 1862. It was during his London years that Liebknecht developed a lifelong friendship and collaboration with Karl Marx.

After 1874, Liebknecht led the Social Democrats in the Reichstag, growing the Social Democrats from a tiny sect into Germany's largest political party. But along the way, Liebknecht was arrested and imprisoned about 16 times. As a Socialist, Liebknecht was an atheist and materialist. He believed churches would fall as a natural result of social revolution. At the 1890 German Socialist Congress at Halle, Liebknecht said, “The Church, whether Catholic or Protestant, is today nothing but a prop, an instrument of the class-State,” which would inevitably fall.

But he counseled against attacking religion outright, not because Liebknecht favored religion, but because others did, and it would be inexpedient for the Socialist cause to alienate possible converts before converting them. Socialists, therefore, prefer to treat religion with indifference rather than invective. When a resolution was proposed that Socialists were to oppose churches and religious dogma, and to proclaim atheism, Liebknecht countered that this would infringe on personal liberty. Besides, Socialists had a sort of religion to begin with. “Have we not that which forms the strength of religion,” Liebknecht pointed out, “faith in the highest ideals?”

Liebknecht remained a prominent leader of the Second Socialist International until his death on 7 August 1900 in Charlottenburg, outside of Berlin. He was so well regarded that 50,000 joined his funeral procession.

This Week in Freethought History (December 8-14)