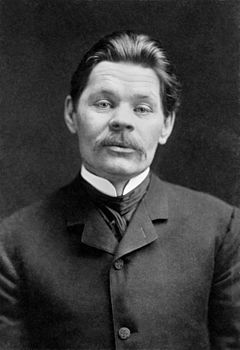 It was on this day, March 28, in 1868, that Alexei Maksimovich Peshkov, better known as Maxim Gorky (Максим Горький), was born in Nizhniy Novgorod, Russia, which was later renamed Gorky in his honor. He was orphaned at age 11 and beaten by his stepfather. Leaving home at age 12, he worked variously as a painter, a baker, a porter, a railwayman and clerk, experiencing firsthand the brutality toward workers of life under the Romanovs. Consequently, his pen name, Gorky, is the Russian word for "bitter."

In spite of poor education, Gorky's photographic memory and humanitarian sentiments launched him into preeminence as a short-story writer, novelist and playwright. His first book, the 3-volume Sketches and Stories (1898-1899), made his reputation as a writer. His concern for the down-and-outs of society made him a natural enemy of the privileged and powerful elite in pre-Revolutionary Russia. His politics also got him into trouble with the Tsarist authorities, who were supported by the Russian Orthodox Church.

In a volume of essays published after his death, Gorky wrote, "Paradise is one of the crass fictions invented by high-priests and fathers of the Church, a fiction whose purpose is to requite the hellish torments of people on earth with the soap-bubble of a hope of peace in another place." (Culture and the People, 1939)

Gorkiy had a contempt for all religion, but also supported the Soviet state, being friends with Chekhov, Tolstoy and (initially) with Lenin. He broke with Lenin over the Communist leader's authoritarianism and rough treatment of intellectuals. As he wrote in November of 1917, "Lenin's power arrests and imprisons everyone who does not share his ideas, as the Romanovs' power used to do." It was as if Lenin were replacing the old religion with a new one. Gorky would have none of Lenin's smug Marxism.

In a 1928 speech to a convention of a group that was actually called the "Belligerent Irreligionists," in Moscow, Gorkiy said,

It is clear that there is no place for religion in this huge process of cultural building which is developing so fast in this country. Our goal is not to ruin churches; our goal is to arrange that people forget about them. What can be stronger than our will? What can be stronger than our reason? Our reason will create miracles. Who created gods? We did.*

He left Russia in 1920, returning permanently in 1931 only after being enticed by Stalin, a dictator who would shoot more that a few writers during his reign. He was never again permitted to leave. Maintaining his passionate humanism to the end, Gorky died suddenly of pneumonia at his dacha outside Moscow on June 17, 1936.

Friedrich von Schiller (1759) It was on this date, November 10, 1759, that Germany's second-greatest poet (after Goethe), Johann Christoph Friedrich von Schiller, was born in Marbach, Württemberg, of pious Lutheran parents. Rather than study theology, Schiller went to military school, but was dismissed for writing an essay critical of religion (On the Relation Between […]