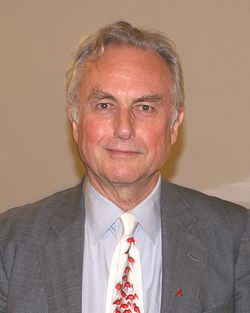 It was on this date, March 26, 1941, that British ethologist and evolutionary biologist Richard Dawkins was born Clinton Richard Dawkins in Nairobi, Kenya. His parents were both educated and interested in the natural sciences, so Dawkins had his childhood questions answered in scientific terms. As he describes it, Dawkins had "a normal Anglican upbringing." Yet he began to have doubts about the idea of God from the age of nine and abandoned belief in God from his mid-teens.

Dawkins was educated at a Church of England school from 1954 to 1959, then studied zoology at Balliol College, Oxford, graduating in 1962. He had a keen interest in, ethology, a study animal behavior. Dawkins came to the US from 1967 to 1969 as an assistant professor of zoology at the University of California, Berkeley. There he became involved in Vietnam anti-war protests. In 1970, he returned to Oxford as a lecturer in zoology, and 20 years later as a reader in zoology.

His 1976 book The Selfish Gene popularized a gene-centered view of evolution. In it, Dawkins coined the term meme, suggesting that units of social information are carried from one person or group to another, in analogous fashion to the transmission of genetic information by genes. “God exists,” Dawkins wrote, “if only in the form of a meme with high survival value, or infective power, in the environment provided by human culture.” Elsewhere in the same book, Dawkins says, “Faith is powerful enough to immunize people against all appeals to pity, to forgiveness, to decent human feelings. It even immunizes them against fear, if they honestly believe that a martyr's death will send them straight to heaven.”

Coming out as an atheist and a humanist in his 1986 book, The Blind Watchmaker, Dawkins argued against the watchmaker analogy that supposedly proved the existence of God from the order and complexity of the universe, much like a watchmaker can be inferred from the order and complexity of a watch. The Blind Watchmaker argues strongly, with facts and scientific method, against creationist beliefs that the universe had a supernatural origin.

An atheist before Darwin could have said, following Hume: “I have no explanation for complex biological design. All I know is that God isn’t a good explanation, so we must wait and hope that somebody comes up with a better one.” I can't help feeling that such a position, though logically sound, would have left one feeling pretty unsatisfied, and that although atheism might have been logically tenable before Darwin, Darwin made it possible to be an intellectually fulfilled atheist.

Based on this and subsequent books of an unabashedly atheist tone, Dawkins became known in the media as “Darwin’s Rottweiler,” after English biologist T.H. Huxley, who, for his assertive advocacy of Charles Darwin’s evolutionary ideas, became known as “Darwin’s Bulldog.” A year after he was appointed Simonyi Professor for the Public Understanding of Science at Oxford, Dawkins published his 2006 book, The God Delusion, causing him to become known as “the UK’s Chief Atheist.” Said Dawkins, “Faith is the great cop-out, the great excuse to evade the need to think and evaluate evidence. Faith is belief in spite of, even perhaps because of, the lack of evidence.”

In The God Delusion, which outsold worldwide all of his other works to date, Dawkins argues that the proofs of God are so unconvincing that belief in God qualifies as a delusion. While touting the positive nature of atheism, as evidence of a healthy, independent and morally balanced mind, Dawkins describes how natural selection and similar scientific theories are superior to the “God hypothesis” in explaining the living world and the cosmos. He then goes on to demolish the idea of religion itself, as useless in morality, as subversive of science, and as mental abuse of children. In particular, Dawkins maintains that, far from morality emanating from any holy book, we use our inborn moral judgment to select what parts we can follow in our own personal morality and what parts we must reject. Dawkins dedicated The God Delusion to his late friend and fellow atheist, Douglas Adams (1952-2001).

In 2010, Richard Dawkins, Christopher Hitchens and other Freethinkers attempted to hold the pope to account under international law for his alleged cover-up of sexual abuse in the Catholic Church, planning to arrest the pope when Benedict visited England from 16-19 September. In the event, Dawkins gave a speech at the “Protest the Pope” rally, declaring the pope “an enemy of humanity,” but in July 2010 the UK government had announced plans to change the law on universal jurisdiction to prevent the issuance of an arrest warrant. Attempts to make a citizen's arrest on the Pope were abandoned.

It was Richard Dawkins who said, “It has become almost a cliché to remark that nobody boasts of ignorance of literature, but it is socially acceptable to boast ignorance of science and proudly claim incompetence in mathematics” and “One of the things that is wrong with religion is that it teaches us to be satisfied with answers which are not really answers at all.”