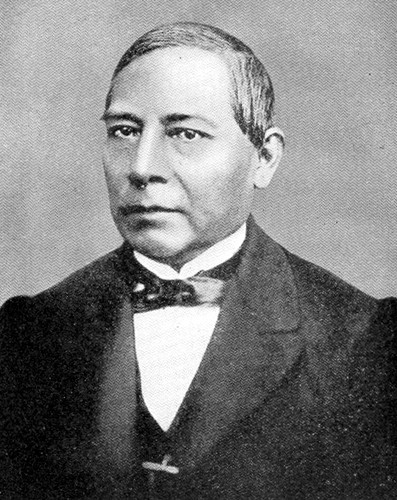 It was on this date, March 21, 1806, that Mexican lawyer and politician Benito Juárez was born Benito Pablo Juárez García of Zapotec origin in Oaxaca. Orphaned at age 3, he lived with his grandparents until they died, so Benito was reared by his uncle. Born a full-blooded Indian peasant, Benito worked in the corn fields and as a shepherd until he turned 12, then escaped on foot to the city of Oaxaca in search of an education. At the time, he was illiterate and could speak only Zapotec, not Spanish.

Taken under the wing of a lay Franciscan, who was impressed with young Benito’s intelligence and thirst for learning, he studied at seminary for a time, but after graduating in 1827, he declined the priesthood to take a law degree. A political career soon followed: Juárez became a lawyer in 1834 and a judge in 1841, then he governed the state of Oaxaca from 1847 to 1852. In 1854, after spending a year in exile because of the corrupt military dictatorship of Antonio López de Santa Anna, Juárez helped draft the Plan of Ayutla, the basis for a liberal revolution in Mexico.

Santa Anna resigned under pressure in 1855 and Juárez returned to Mexico to participate in a provisional government under General Juan Álvarez, inaugurating the period known as La Reforma. Under La Reforma, the Liberal Party curtailed the privileges and checked the corruption of the Catholic Church and the military. For example, the Ley Juárez (Juárez's Law) of 1855 abolished special clerical and military preferences, and declared all citizens equal before the law. Juárez used liberal efforts to modernize the country.

This did not sit well with the church and the military, who launched a revolt under the Plan of Tacubaya on December 17, 1857. At this time, Juárez was chief justice and, as the revolt was put down, the chief justice became interim President of Mexico. As it was clear that the churches could not be trusted, in 1859, Juárez declared the confiscation of church properties to pay off debts incurred during the Reform War of 1858-61. The liberal party drew on support of regionalist forces, even as the conservatives (churches and military) called in French mercenaries, so that in spite of the conservatives’ initial military advantage, Mexico City was recaptured in January 1861 and Juárez was properly elected president that March.

In use of the broad powers with which I have been invested, I have found it proper to declare that
1. Priests of any cult who, abusing their ministry, excite hate or disrespect for our laws, our government, or its rights, will be punished by three years’ imprisonment or deportation.
2. Because of the present crisis all cathedral chapters are suppressed, except for that of Guadalajara because of its patriotic behavior.
3. Priests of all cults are forbidden from wearing their vestments or any other distinguishing garment outside of the churches… All violators will be punished with fines of ten to one hundred pesos or imprisonment from fifteen to sixty days.

Juárez served five terms as president of Mexico, spanning the years 1861-1872, under a new Mexican constitution severely restricting the power of the Roman Catholic Church. He was the first full-blooded indigenous national ever to serve as President of Mexico. Juárez died of a heart attack at age 66, working at his desk in the National Palace, on 17 July 1872. It was the atheist Benito Juárez who said, “Among individuals, as among nations, peace is the respect of others' rights” (“Entre los Individuos, como entre Las Naciones, El respeto al derecho ajeno es la paz”).

Gore Vidal (1925) It was on this date, October 3, 1925, that American writer Gore (Eugene Luther) Vidal Jr was born in West Point, New York, where his father was an instructor at the military academy. He grew up near Washington, DC, in the house of his blind grandfather, the populist Democrat, Senator Thomas Pryor […]