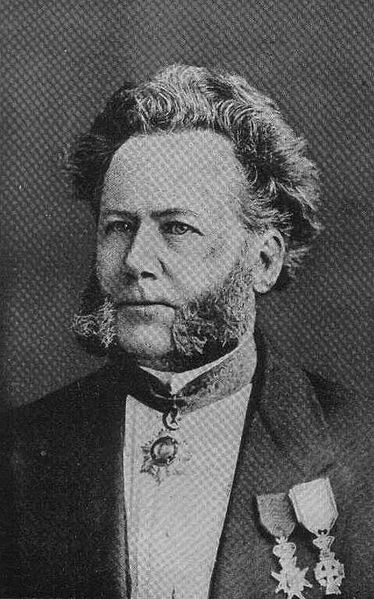 It was on this day, March 20, 1828, that Norwegian poet and playwright Henrik Ibsen was born in the coastal town of Skien. He studied medicine and worked for a time as a chemist's assistant before turning to the theater in the early 1850s. Ibsen left the country in 1863, living and writing in Italy and Germany for the next 27 years. He is chiefly remembered for his plays: A Doll's House, An Enemy of the People, and Hedda Gabler, and his collaboration with composer Edvard Grieg on Peer Gynt.

Henrik Ibsen had pretty much abandoned formal religion by the time he was 20, and began writing poems advocating revolution. This coincided with a revolutionary fervor sweeping Europe, especially France and Germany, around 1848, against a reactionary nobility bent on recovering its former privilege. The revolutionary ideals appealed to Ibsen, whose family, once prosperous, had sunk into poverty. He began associating with the Danish historian and literary critic Georg Brandes and not only abandoned religion but became an atheist.

In an 1871 letter to dramatist Bjørnstjerne Bjørnson, Ibsen said. "Bigger things than the state will fall ... all religion will fall." The idea carried over into his plays: Brand (1866), was a lyric drama about a priest who follows his high principles and is crushed — literally — in the end. And his 1876 play, The Emperor and the Galilean, hardly remembered even though Ibsen considered it his most important play, shows the superiority of paganism to Christianity.

Ibsen's anarchistic individualism, coupled with his sojourn in Europe, changed his artistic outlook. As he wrote to Bjørnson (1865):

If I were to tell at this moment what has been the chief result of my stay abroad, I should say that it consisted in my having driven out of myself the aestheticism which had a great power over me – an isolated aestheticism with a claim to independent existence. Aestheticism of this kind seems to me now as a great curse to poetry as theology is to religion.

It was Ibsen who wrote,

He who wishes to understand me, must know Norway. The magnificent, but severe, natural environment surrounding people up there in the north, the lonely, secluded life ... forces them to be unconcerned with others, to keep to their own. That is why they become introspective and serious, they brood and doubt — and they often lose faith."

In his last six years he suffered incapacitating strokes that left him unable to write. After Henrik Ibsen died, on 23 May 1906, in what is now Oslo, all of Norway paid for his funeral.