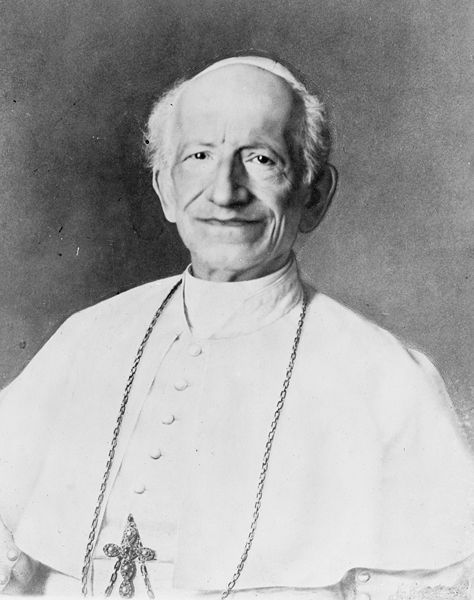 It was on this date, March 2, 1810, that the man who would become Pope Leo XIII was born Vincenzo Gioacchino Raffaele Luigi Pecci in Carpineto, east of Rome, Italy. Ordained in 1837, and created cardinal in 1853, he was an aggressive exponent of the religious philosophy of Thomas Aquinas. This perhaps explains why, becoming pope in 1878, chiefly because he was not expected to live long (he was just shy of age 68), Leo had great difficulty reconciling the Church to the modern world. Leo especially objected to things we take for granted today: free elections, secular public education, freedom of religion, freedom of speech, freedom of association, freedom of the press, separation of church and state, legal divorce and equality before the law.

As cardinal, he was a disaster in diplomatic missions — this according to his official Catholic biographer.* As pope, Leo lost more Catholic communicants than the Reformation, both by refusing to recognize the French Republic until it was too late, and by repudiating the Italian Government. Known primarily for two encyclicals, in Humanum Genus Leo defied the modern world by intoning, "It is quite unlawful to demand, defend, or to grant unconditional freedom of thought, or speech, of writing or worship, as if these were so many rights given by nature to man," and "Divorce is born of perverted morals and leads to vicious habits."

Leo's other great encyclical, Rerum Novarum, was a tepid endorsement of a living wage for workers, with no specifics, that was repudiated by his successor, Pius XI, who endorsed the Fascist-Corporate State. Leo's embarrassing admonishment of "Americanism," in an 1898 letter to Cardinal James Gibbons ("Testem Benevolentiæ"), was also disowned by his successors. In sum, the best that can be said for him, aside from his opening of the Vatican secret archives (they were slammed shut after his death), is that by dividing the world into two camps — one for Catholics and one for everyone else, who followed Satan — Leo showed the true medieval pedigree of his Roman Catholic Church.

Butler wrote, "Prayers are to men as dolls are to children. They are not without use and comfort, but it is not easy to take them very seriously."