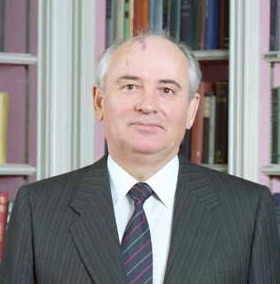 It was on this date, March 2, 1931, that former Soviet Union President, and Nobel Peace Laureate, Mikhail Sergeyevich Gorbachev (Михаил Сергеевич Горбачëв) was born in the village of Privolnoye, near Stavropol, in what is now Russia — but what at the time was the USSR. Baptized in the Russian Orthodox Church, Gorbachev was reared an atheist, but admits that his entire family were believers. Gorbachev himself said, "Jesus was the first socialist, the first to seek a better life for mankind."

Gorbachev became General Secretary of the Soviet Union on 11 March 1985, the first Communist leader to be born after the Russian Revolution. During his tenure, which ended on 25 December 1991, Gorbachev introduced economic reforms he called perestroika, social freedoms he called glasnost, and took the first tentative steps toward demokratizatsiya or "democratization" of the Soviet state. On his watch, the USSR collapsed and its client states in Eastern Europe broke away.

Much of the credit for the downfall of Soviet Communism is improperly attributed to US President Ronald Reagan (1981-1989), a Christian who rarely attended church: indeed, Reagan chided Gorbachev for his Atheism. But it was Atheist Mikhail Gorbachev who brought necessary reforms to the Soviet Union. Mikhail Gorbachev, not Ronald Reagan, was awarded the Nobel Prize for Peace in 1990.

Gorbachev said on C-SPAN's "Booknotes" program, "I don't know how many years God will be giving me, [or] what his plans are," and elsewhere that "the revival of the Russian Orthodox Church is one of the most important gains of perestroika," but these references are probably echoes of sentiments learned in his rural Russian boyhood. Gorbachev remains an Atheist, but in leading the establishment of religious freedom laws in the former Soviet Union he demonstrated respect for all religions. Currently the head of the Gorbachev Foundation — whose aim is "to help assert democratic values and moral, humanistic principles in the life of society," and to promote a "more equitable international order" — Gorbachev serves as its President and Irina Virganskaya, his daughter, as Vice-President.