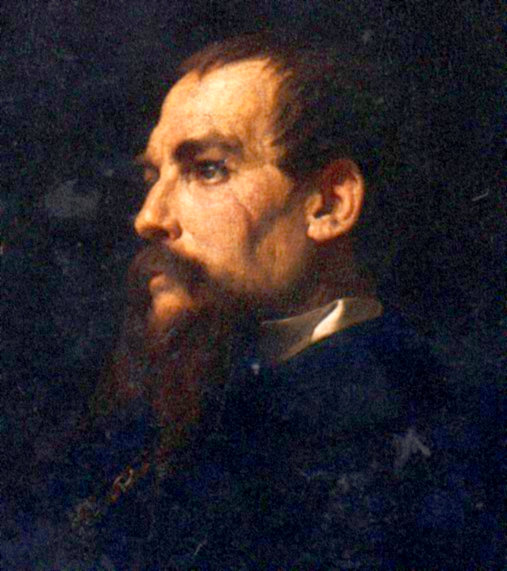 It was on this date, March 19, 1821 that the English explorer, Orientalist and part-time spy, Sir Richard Francis Burton was born. Burton studied Arabic at Oxford, then joined the military in 1842. He traveled to India, and other posts, where he learned Hindustani, Persian, Sindi and Punjabi. He also began a long career as a spy for the military and the East India Company. In 1850 Burton returned to England, where he met the woman he eventually married, Isabel Arundell, a devout Catholic.

Two years later, Burton posed as a pilgrim and journeyed to Mecca and Medina. He was accepted without question, in part because in preparation for the journey he studied Islam and had himself circumcised! Later, Burton entered the forbidden city of Harar, in what is now Somalia, where Westerners were executed if caught.

With John Hanning Speke he traveled twice to Africa and discovered the source of the Nile, an ages-old mystery. The two had a falling out over credit for the discovery. This adventure was dramatized in the 1990 film Mountains of the Moon.

As he lay dying in 1890, his wife Isabel had the Catholic sacraments administered to the helpless man and, afterward, burned Burton's unfinished manuscripts and notes. To the public she characterized him as a "sturdy Deist" — she could hardly call him a sturdy Catholic — with an "unknown and impersonal" relationship with God. It is well attested that in his journeys to Eastern and Western holy places, Burton fit into the language and culture so seamlessly that no one questioned his orthodoxy. He either believed all religions or none of them. He did not believe in a future life. A fairer estimate of Burton's religion might be that he was an Agnostic.

Burton wrote and translated much in between his many adventures, including his masterpiece, The Tales of the Arabian Nights, and some 43 more volumes! At one time he said, "The more I study religions the more I am convinced that man never worshipped anything but himself." And further, "All so-called revealed religions consist mainly of three portions, a cosmogony more or less mythical, a history more or less falsified, and a moral code more or less pure."

In 1886, Queen Victoria awarded Burton the honor of Knight Commander of St. Michael and St. George for his service to England, although when he died, on October 20, 1890, he was considered unfit to be buried in Westminster Abbey.

Sir Richard Francis Burton is not to be confused with Welsh actor Richard Burton, CBE (1925–1984).