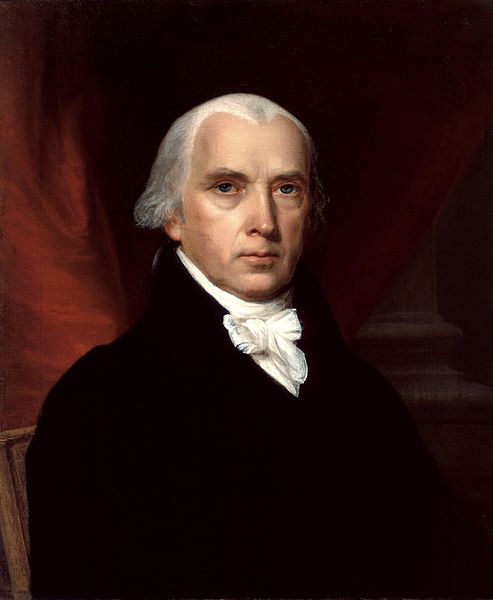 It was on this date, March 16, 1751, that the Fourth President of the United States, James Madison, was born in Port Conway, Virginia.

Sixteen years after graduating Princeton, where he studied religion and history as well as law, Madison represented Virginia at the Constitutional Convention. Among the founders, Madison wielded great influence in its drafting, and, with Alexander Hamilton and John Jay, explained much of it in the Federalist Papers. The Constitution that emerged in 1789 contained a First Amendment, guaranteeing freedom of religion, among other rights, that was achieved largely through Madison's influence. Grateful Americans made Madison a two-term President, from 1809-1817.

On religion, Madison allowed that, "There appears to be in the nature of a man what ensures his belief in an invisible cause of his present existence and an anticipation of his future existence." Unbiased scholars say that Madison was "no more than conventionally religious" and that he later became a Deist. His clearest declarations are in his Memorial and Remonstrance of 1785 and his undated essay "Monopolies, Perpetuities, Corporations, Ecclesiastical Endowments," which he probably wrote in 1820.

As much as the "establishment clause" in the First Amendment has been debated, it is interesting to recall it's principal author's own interpretation: "Congress should not establish a religion and enforce the legal observation of it by law," wrote Madison in his 1789 Annals of Congress, "nor compel men to worship God in any manner contrary to their conscience."

But did Madison mean for that amendment to apply to the individual states? "No state," wrote Madison, "shall infringe the equal rights of conscience, nor the freedom of speech, or of the press, nor of the right of trial by jury in criminal cases."

In his Memorial and Remonstrance, Madison pointed out that,

Because we hold it for a fundamental and undeniable truth, `that religion or the duty which we owe to our Creator and the manner of discharging it, can be directed only by reason and conviction, not by force or violence.' The Religion then of every man must be left to the conviction and conscience of every man; and it is the right of every man to exercise it as these may dictate.

It was Madison's mature opinion that religion and government should remain separate, neither one supporting the other. He held that view until his death, on June 28, 1836 at Montpelier in Virginia.

The Week in Freethought History (January 6-12)