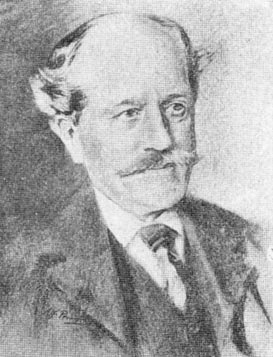 It was on this date, March 13, 1855, that American businessman and astronomer Percival Lowell was born in Boston, Massachusetts, the brother of the poet Amy Lowell. Fascinated with astronomy since his youth, Lowell graduated from Harvard University in 1876, but chose to assure his finances by running a cotton mill, managing trust funds, and making wise investments. By the time he was 28, he had made his fortune and never had to work again.

Using his wealth and influence, Lowell dedicated himself to astronomy, founding the observatory which bears his name in Flagstaff, Arizona, in 1894. He began to observe and report on the infamous “canals” of Mars, inspired by the drawings of Italian astronomer Giovanni Schiaparelli, director of the Milan Observatory. Although Lowell succeeded in popularizing the study of Mars, his observations could not be duplicated by other astronomers and Lowell and his assertion that these nonnatural features were evidence of life on Mars detracted from his reputation. Using the sixty-inch Mount Wilson Observatory telescope in Southern California, in 1909 astronomers pretty much discounted his fanciful observations, and Lowell’s canals were finally discredited by Mariner 4 when it took the first close-up pictures of Mars in 1965.

During the last decade of his life, Lowell devoted his efforts to the search for a hypothetical planet beyond Neptune, Planet X. Although Lowell did not discover Pluto, the Lowell Observatory did photograph Pluto in March and April 1915 and the discovery was made, by Clyde W. Tombaugh in 1930, by observing discrepancies between photos. This earned a sort of naming right, formed of his initials, PL, for Percival Lowell's greatest contribution to planetary studies. However, in 2006, Pluto was reclassified as a dwarf planet by the International Astronomical Union.

It is not generally reported, but in the 1880s, Lowell traveled extensively in Asia. He spent about ten years in Japan, before the country had become corrupted by militarists and capitalists, writing down and publishing his observations on Japanese behavior, economics, language, psychology and religious practices. While there, like Lafcadio Hearn, he began to hold Christianity in contempt and became an agnostic. The most popular of Lowell’s books on the Japan, The Soul of the Far East (1888), suggested that human progress is a function of individuality and imagination.

Though this religion of impersonality is not their child, it is their choice. [wrote Lowell] They embraced it with the rest that India taught them, centuries ago. But though just as eager to learn of us now as of India then, Christianity fails to commend itself. This is not due to the fact that the Buddhist missionaries came by invitation, and ours do not. Nor is it due to any want of personal character in these latter, but simply to an excess of it in their doctrines.

Instead, Lowell concludes, their culture is more comfortable with ideas of impersonality in religion and group cohesion. Furthermore, Lowell says, the Buddhist ethic has some singular features in common with Christianity: “The Roman Catholic,” he wrote, “who prays to a wooden image of Christ is not one whit less idolatrous than the Buddhist who worships a bronze statue of Amida Butzu.” Noting that the notion of immortality holds no great attraction in the Far East, Lowell also wrote, “Among such a people personal Christianity converts but few. They accept our material civilization, but they reject our creeds. To preach a prolongation of life appears to them like preaching an extension of sorrow. At most, Christianity succeeds only in making them doubters of what lies beyond this life.”*

Lowell died of a stroke in Flagstaff, on 12 November 1916. He was buried at Lowell Observatory. It was Percival Lowell who said, “Imagination is as vital to any advance in science as learning and precision are essential for starting points.”

John Keats (1795) It was on this date, October 31, 1795, that British poet John Keats was born in London. His family was close, and when his father died in an 1804 riding accident, and his mother died of tuberculosis six years later, the 15-year-old Keats, two brothers and a sister, turned to each other. […]