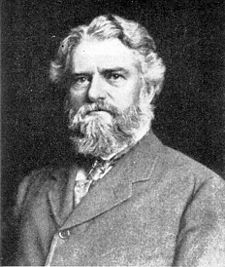 It was on this date, March 12, 1835, that Canadian-American astronomer and mathematician Simon Newcomb was born in Wallace, Nova Scotia. Simon apprenticed to an herbalist, who claimed to cure diseases with herbs, at age 16. But the bright youngster recognized his mentor’s unscientific approach was a hallmark of pseudoscience, broke off his apprenticeship with this charlatan, and returned home. While teaching in Maryland from 1854 to 1856, he found time to study political economy and religion, but also mathematics and astronomy, being particularly drawn to Isaac Newton’s Principia. He enrolled at the Lawrence Scientific School of Harvard University, graduating with a BS in 1858.

Just prior to the American Civil War, in 1861 Newcomb became a professor of mathematics at Johns Hopkins University and astronomer at the United States Naval Observatory in Washington D.C. He became President of the American Association for the Advancement of Science in 1877, and was awarded many gold medals for his achievements in mathematics and astronomy. By the late 1800s, he was America’s most celebrated scientist and used his popularity to push the scientific method as a basis for all practical action and a guide for all disciplines.

The British astronomer Richard A. Proctor (1837-1888), a Fellow of the Royal Astronomical Society, quotes Newcomb (Knowledge, 1 October 1888) as rejecting the idea of immortality. While in America, Simon Newcomb never made any secret of his Freethought views. In Saint Louis, as retiring president of the American Association for the Advancement of Science, Newcomb gave a major address in August of 1878 calling for the separation of scientific reasoning and theological arguments. The speech, reprinted in The Independent, drew anonymous replies from two defenders of the natural theology of Englishman William Paley, who were later revealed to be Harvard botanist Asa Gray (1810–1888) and Congregationalist clergyman, and the president of Yale College, Noah Porter (1811–1892).

“Although he had begun life as a fundamentalist Protestant,” writes R.A. Jarrell in the Dictionary of Canadian Biography, “Newcomb later took a detached and philosophical view of his Christianity.” Indeed, three unpublished manuscripts by Newcomb in the Library of Congress attest to his progressive abandonment of traditional beliefs, one called “Religious Autobiography” (1879), another (1880) “Religious Influences” in a section of an unpublished MS called “Autobiography of My Youth” and a third, written within a few weeks of his death, called “Development of my Religious Views.”

Newcomb died of bladder cancer in Washington, DC, on 11 July 1909 and was buried with military honors in Arlington National Cemetery. Among those in attendance was newly elected President William Howard Taft.