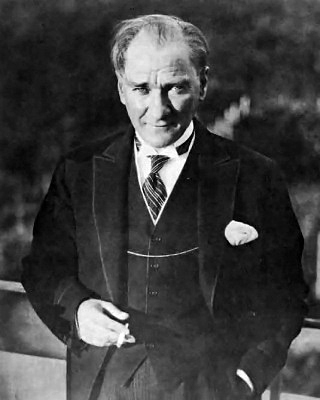 It was on this date, March 12, 1881, that the future President of the (secular) Republic of Turkey, Mustafa Kemal Atatürk, was born as Mustafa in the Koca Kasım Pasha neighborhood in Selânik, Ottoman Empire. He was born into a middle-class, Muslim, Turkish-speaking family. He was dubbed Mustafa Kemal (meaning “perfection” or “maturity”) by his mathematics teacher. His parents wanted him to learn a trade, but instead, in 1896, he enrolled into a military high school, then in 1899, he enrolled at the War College in the Ottoman capital city Constantinople (modern Istanbul) and graduated in 1902. He graduated from the Military Staff College in Constantinople in 1905.

In his early years, Mustafa absorbed liberal ideas from his Turkish father. Under the Ottoman Sultan, Mustafa Kemal formed a Freedom Society for young military officers. This later merged into the Committee of Union and Progress. He led the Turkish national movement into the Turkish War of Independence, following the defeat of the Ottoman Empire in World War I. On 29 October 1923, Turkey became a Republic with Mustapha Kemal its first President. With dictatorial powers, Atatürk then embarked with humanity and remarkable success on a program of political, economic, and cultural reforms. His goal was to transform the former Ottoman Empire into a modern, westernized and secular nation-state. The principles of Atatürk's reforms, upon which modern Turkey was established, are referred to as Kemalism. He also earned the name Atatürk (the Great Turk) for his astonishing achievement: turning a Muslim state into a secular state.

As the Muslim partisans raised revolts in the provinces, Atatürk broke their power in order to secularize and modernize the country. He paid particular attention to the liberation and education of women. Atatürk had great contempt for all religion, and tried to extinguish it, but the result was a compromise. As he was a complete skeptic, Atatürk claimed that his only standard was the good of Turkey. Indeed, he said in 1926,

I have no religion and at times I wish all religions to the bottom of the sea. He is a weak ruler who needs religion to uphold his government; it is as if he would catch his people in a trap. My people are going to learn the principles of democracy, the dictates of truth, and the teachings of science. Superstition must go. Let them worship as they will; every man can follow his own conscience, provided it does not interfere with sane reason or bid him against the liberty of his fellow-man. (Atatürk: The Biography of the Founder of Modern Turkey by Andrew Mango, 1928)

Mustafa Kemal Atatürk died on 10 November 1938, at the age of 57. Dozens of nations sent emissaries to his funeral. He donated all he had to Turkey and pensioned his surviving sister. It was the atheist Mustafa Kemal Atatürk who said, “Our true mentor in life is science.”