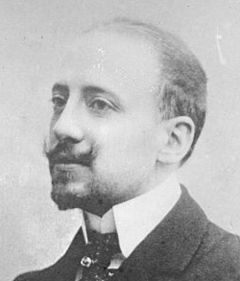 It was on this date, March 12, 1863, that Italian poet, journalist, novelist and dramatist Gabriele D’Annunzio was born Gaetano D’Annunzio in Pescara, Abruzzo, the son of a wealthy landowner and mayor. Gaetano acquired the nickname “Gabriele,” from his angelic looks as a child. And a precocious talent he was. He published his first poetry at the age of sixteen while still at school. By 1881 Gabriele had become a member of various literary groups and written articles and criticism for local newspapers while a student at the Sapienza University at Rome.

What followed were such works as Canto novo (1882), Terra vergine (1882), L’intermezzo di rime (1883), Il libro delle vergini (1884) and the major portion of the short stories that were collected under the title San Pantaleone and published in 1886. D’Annunzio’s poems, novels, and plays won recognition around the world. He was a leader of the Risorgimento or “rebirth” of Italian literature. It is significant that D’Annunzio defined the Risorgimento as “the worship of man.”

Politically, D’Annunzio began as a Socialist: he showed contempt for the alliance between Mussolini and the Papacy. However, afterward he was reconciled politically and Mussolini gave him his title, “Principe di Montenevoso” (Prince of Snowy Mountain). Thereafter, his political associations were unfortunate ones and one of the most brilliant Italian writers of modern times began to lose his literary brilliance.

In 1937 he was made president of the Royal Academy of Italy. The next year, D'Annunzio died of a stroke, at his home in Gardone Riviera, on 1 March 1938, age 74. Mussolini gave him a state funeral and he was interred in a magnificent white marble tomb at Il Vittoriale degli Italiani.

He always expressed a profound contempt for the Roman Catholic Church, which returned the affection by putting all D’Annunzio’s work on the Index of Prohibited Books. The Pope specifically warned Catholics not to read D’Annunzio. Indeed, the Catholic Encyclopedia, which does not claim him among the faithful, writes of D’Annunzio, “Alike in verse and in prose, Gabriele d'Annunzio ... has perverted extraordinary talents to the basest literary uses; it is impossible to believe that his gorgeous rhetoric, with its elaboration of sensual passion and its gross obscenity, can win any permanence.” It was Gabriele D’Annunzio, to the last an apostate, who said, “Limit to courage? There is no limit to courage.”