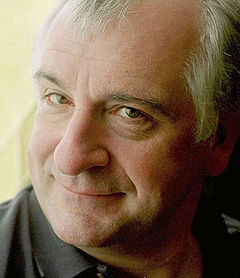 It was on this date, March 11, 1952, that British humorist and writer Douglas Adams was born in Cambridge. Best known as the author of The Hitchhiker's Guide to the Galaxy with it’s signature injunction, “Don’t Panic,” this veritable franchise started on BBC radio, developed into a "trilogy" of five books, a television series, several stage plays and in 2005 a feature film. Even the titles are amusing: The Hitchhiker's Guide to the Galaxy (1979), The Restaurant at the End of the Universe (1980), Life, the Universe and Everything (1982), So Long, and Thanks for All the Fish (1984) and Mostly Harmless (1992). In addition to the Hitchhiker's Guide series, Adams was the author Dirk Gently's Holistic Detective Agency (1987) and The Long Dark Tea-Time of the Soul (1988).

In his early years, Douglas was an exceptional student on a number of levels. His form master at prep school described him as “unnaturally tall and in his short trousers he looked a trifle self-conscious. Yet it was his ability to write first-class stories that really made him shine.” He was awarded a place at St John's College, Cambridge to read English on the strength of an essay on religious poetry that discussed The Beatles alongside William Blake. But his real purpose at Cambridge was to join the Footlights, a student comedy club that accepted comic talent by invitation only and was know as a breeding ground for comic talent in England.

"I am convinced that there is not a god," Douglas Adams said. But religion fascinated him: "I love to keep poking and prodding at it. I’ve thought about it so much over the years that that fascination is bound to spill over into my writing." So he would not be asked if he meant agnostic, Adams described himself as a "radical atheist." As a staunch atheist, Adams famously imagined a sentient puddle who wakes up one morning and thinks, "This is an interesting world I find myself in—an interesting hole I find myself in—fits me rather neatly, doesn't it? In fact it fits me staggeringly well, must have been made to have me in it!"

Adams died on 11 May 2001 at age 49 in California. Fellow atheist Richard Dawkins dedicated his popular book The God Delusion to Adams, and quotes him saying, "Isn’t it enough to see that a garden is beautiful without having to believe that there are fairies at the bottom of it too?" Never one to take target dates seriously in his writing, it was Douglas Adams who said, "I love deadlines. I love the whooshing noise they make as they go by."