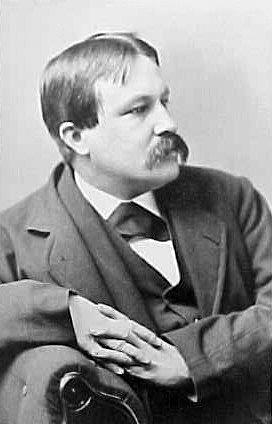 It was on this date, March 1, 1837, that American writer, historian, editor and founder of the "naturalist" movement in fiction, William Dean Howells, was born in Martin's Ferry, Ohio. Howells not only learned the print trade as a typesetter on his father's paper, but also his father's creed, which followed the teachings of 18th century Swedish mystic Emanuel Swedenborg (1688-1772). Howells became an editor at age 21, began writing poetry shortly thereafter, but achieved his first success with an 1860 Life of Lincoln.

His newfound stature resulted in a call to serve as consul to Italy during the American Civil War, 1861 to 1865. There Howells gathered material for his Venetian Life (1866) and Italian Journeys (1867), and much of his future work. On his return to America he became editor of the Atlantic Monthly for ten years, and later of Harper's magazine.

Howells cast off his Swedenborgian creed in his youth and became a social liberal and a sentimental Theist. We can see this in his poem "Lost Beliefs":*

One after another they left us ;
The sweet birds out of our breasts
Went flying away in the morning:
Will they come again to their nests ?
Will they come again at nightfall,
With God's breath in their song ?
Noon is fierce with the heats of summer,
And summer days are long !

O my life, with thy upward liftings,
Thy downward-striking roots,
Ripening out of thy tender blossoms
But hard and bitter fruits ! —
In thy boughs there is no shelter
For the birds to seek again.
The desolate nest is broken
And torn with storms and rain!

William Dean Howells died a non-Christian theist in New York City on 11 May 1920. His novel, The Rise of Silas Lapham (1885), is considered a classic, but Howells's Literary Friends and Acquaintances (1901) discusses the Rationalist views of some leading American writers, including that of his Agnostic friend James Parton, of whom Howells wrote, "He was a man of eminent courage, and in the days when to be an agnostic was to be almost an outcast, he had the heart to say of the Mysteries, that he did not know."** About that time Howells told Parton a new light had lately come into his life, "by which," he said, "I saw all things that did not somehow tell for human brotherhood dwarfish and ugly..."

Said Einstein, "I believe in Spinoza's God… not in a God who concerns himself with the fates and actions of human beings."