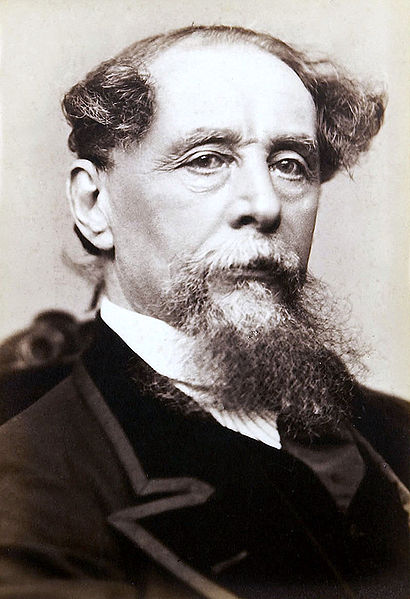 It was on this date, February 7, 1812, that the greatest novelist in the English language, Charles Dickens, was born Charles John Huffam Dickens in Landport, Hampshire, England. While his father was in Marshalsea debtor's prison for living beyond his means, Dickens interrupted his education to work in a bootblacking factory. He later completed his education with self-education and worked variously as a law clerk and a shorthand reporter. It was his skill in shorthand, and his keen powers of observation of speech and character, that helped Dickens draw such vivid characters in his novels.

His early novels, Sketches by Boz (1836) and Pickwick Papers (1836-37), serialized in literary magazines, as was the custom of the day, were followed by Oliver Twist (1837-39), Nicholas Nickleby (1838-39), The Old Curiosity Shop (1841) and Barnaby Rudge (1841). Dickens was an acclaimed author by the time he made his first American tour — where his novels were shamelessly pirated for the stage — and he returned to publish American Notes (1842) and invented the modern idea of Christmas with A Christmas Carol (1843).

All of Dickens' novels are characterized by attacks on social evils, injustice, and hypocrisy. This extended to religious hypocrisy, as well. While he was devout in his own way, Dickens typifies the romantic regard for religion coupled with a disdain for its theology. To his friend and first biographer, John Forster, Dickens wrote, "I have a sad misgiving that the religion of Ireland lies as deep at the root of all its sorrows, even as English misgovernment and Tory villainy."[1] Edgar Johnson, his chief modern biographer, wrote,

Inclining toward Unitarianism, he had little respect for mystical religious dogma. He hated the Roman Catholic Church, "that curse upon the world," as the tool and coadjutor of oppression throughout Europe. ... He had rejected the Church of England and detested the influence of its bishops in English politics.[2]

Dickens ridiculed evangelicals in Dombey and Son, for example, and wrote Sunday Under Three Heads against an Act of Parliament proposing to outlaw Sunday recreation for the working class. In it, he described preachers thus:

He stretches his body half out of the pulpit, thrusts forth his arms with frantic gestures, and blasphemously calls upon the Deity to visit with eternal torments those who turn aside from the word, as interpreted and preached by — himself. A low moaning is heard, the women rock their bodies to and fro, and wring their hands.[3]

Said Dickens, "Missionaries (Livingstone always excepted) are perfect nuisances, and leave every place worse than they found it."[4] Yet Dickens prayed often, included a declaration of Christian belief in his will, and recommended his relatives follow the morality of Jesus: "I now most solemnly impress upon you the truth and beauty of the Christian religion," he said to his son, Edward. It was for biographer Hesketh Pearson to explain:

A sudden stroke, after years of touring and strenuous public readings, resulted in Dickens' death on 8 June 1870. It was Charles Dickens who said of religious bigotry, "There is something in the sonorous quavering of the harsh voices, in the lank and hollow faces of the men and the sour solemnity of the women, which bespeaks this a stronghold of intolerant zeal and ignorant enthusiasm."[6]

NB: You can read full-text versions of the works cited through the Project Gutenberg site:

Turner ridicules the idea of "hell," believes "nature is god" and rejects the biblical concept of creation.