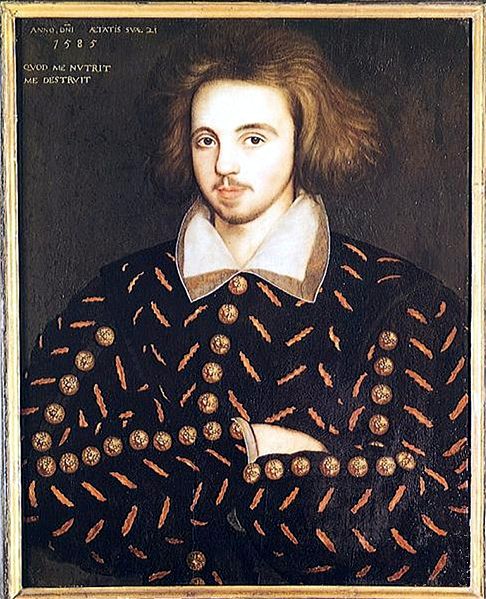 It was on this date, February 6, 1564 (by some accounts), that British poet and playwright Christopher Marlowe was born in Canterbury, the son of a shoemaker. He nevertheless studied at Corpus Christi College, Cambridge, excelling in the Bible and Reformation theologians as well as philosophy and history. Pausing from his studies to work in secret for the British government, Marlowe returned to take an M.A. degree, which the university was reluctant to grant, believing that he had converted to Roman Catholicism. But the Queen's Privy Council settled the matter in Marlowe's favor.

Rejecting a clerical career, Marlowe moved to London and began a six-year career as a dramatist, producing the two parts of Tamburlaine the Great (c. 1587), Dr. Faustus (c. 1588) (in which appear the famous lines, "Was this the face that launch'd a thousand ships, And burnt the topless towers of Ilium? Sweet Helen, make me immortal with a kiss! Her lips suck forth my soul: see, where it flies!"), The Jew of Malta (c. 1589) (in which appears the line, "I count religion but a childish toy, and hold there is no sin but ignorance"), and Edward II (c. 1592). As well he wrote the poems Hero and Leander and The Passionate Shepherd to His Love; in the latter appear the famous lines, "Come live with me, and be my love; And we will all the pleasures prove That hills and valleys, dales and fields, Woods or steepy mountain yields."

To Algernon Charles Swinburne, Marlowe was "the most daring and inspired pioneer of all our literature." He was arguably the most talented playwright in England next to William Shakespeare, who was born in the same year, and had he lived beyond age 29 he might have equaled or even surpassed the Bard. It is generally recognized that Marlowe's works influenced Shakespeare's Titus Andronicus and King Henry VI.

Although Marlowe has Faustus call upon Christ to save him from his pact with the devil, the playwright had little regard for religion. Marlowe, Walter Raleigh and others formed a private circle of Rationalists, which clerical critics called "Raleigh's school of Atheism" (scholars now call it "The School of Night"). Freethought usually grows when free discussion is allowed, and although it was widespread among educated elites, in Elizabethan England avowed religious skepticism was still a crime that could be punished severely: Marlowe's friend Francis Kett was burned for heresy in 1589.

The term "Atheist" was an inexactly defined charge of the day, and Marlowe's former roommate and fellow dramatist, Thomas Kyd, gave evidence (albeit under torture) that Marlowe denied the divinity of Christ. This, and criticism of "scoffing poets" by rival playwright Robert Greene, put him under suspicion of Atheism. And when Richard Baines testified that Marlowe had said both "St John the Evangelist was bedfellow to Christ and leaned always in his bosom, that he used him as the sinners of Sodoma," and "That all they that love not Tobacco & Boies were fooles," he was equally suspected of homosexuality.

For a time, his royal connections spared him prison — he became an agent of statesman Sir Francis Walsingham in the secret service of Elisabeth I — though he did serve time on at least two occasions for killing an opponent in fights. It is assumed by some scholars that Marlowe's death in Eleanor Bull's tavern on 30 May 1593 was not a simple dispute over a bill that accelerated under the fuel of drink. It is possible that he was murdered for political reasons: A week before his death, the Privy Council had ordered Marlowe's arrest on charges of Atheism, blasphemy, subversion and homosexuality.*

In the end, Marlowe was buried in an unmarked grave. His killer, Ingram Frizer, pleaded self-defense. The Queen pardoned him.

An informant filed a charge with the Privy Council saying of Marlowe: "... Almost into every company he cometh, he persuades men to atheism, willing them not to be afraid of bugbears and hobgoblins." The charge accused Marlowe of saying that "the first beginning of religion was only to keep men in awe" and that "all Protestants are hypocritical asses." It concluded: "All men in Christianity ought to endeavor that the mouth of so dangerous a member be stopped."

Denis Diderot (1713) On this date, October 5, 1713, the most famous French Encyclopedist, Denis Diderot, was born in Langres. Educated by the Jesuits (1728-1732), he took the opportunity to read everything that came his way, and then escaped before they could ordain him. Diderot gradually lost his faith between his Essay on Merit and […]