February 5: The Pseudoscience of Astrology

The Great Aquarian Conjunction (1962):
The Pseudoscience of Astrology

It was on this date, February 5, 1962, that the sun, the moon, Mercury, Venus, Mars, Jupiter, and Saturn were in conjunction as viewed from Earth. Sometimes called the Great Aquarian Conjunction, the heavenly bodies were not in a straight line, but only within 16 degrees of each other. They were joined by a solar eclipse. Astrologers predicted dire and fantastic things that, of course, never took place. This should not be surprising: the pseudoscience of astrology rarely gets it right – and astrology is no better than statistical chance for predicting the future. 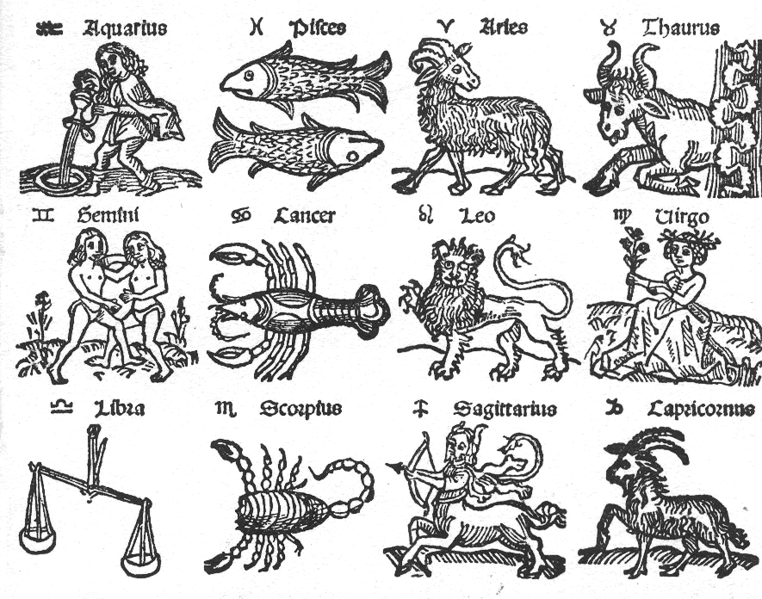 The Zodiac - a 16th Century Woodcut

So, what is astrology? From its earliest days, in ancient Babylonia and Egypt, astrology was an attempt to get the magic from the skies to work for the benefit of people on earth. Because the seasons were counted by the sun, moon and stars, it was only natural for our forbears to impute by analogy, "as above, so below." The priestly class, jealously guarding its domain, took care of the "invisible world" while the people paid with visible treasure. There was no cause-effect relationship between events in the heavens and events on earth, but there was no scientific method or statistics, either, so the priestly class became a kleptocracy benefiting from ignorance.

The people of Ancient Greece never questioned the correspondences assumed between the stars and ourselves, but chafed at the innate determinism in Babylonian astrology. They added an element of "free will" to the pseudoscience and passed it on to the Romans. Rome, more comfortable with fatalism than Greece, continued an almost unquestioning acceptance of the notion that the stars could predict the future – or, when predictions failed, at least provide signs and portents. This often required some creative explanations as to why predictions didn't come true. Astrologers were perhaps the first to instinctively understand human nature and human gullibility – but used it only for power or profit.

In the second century CE, Claudius Ptolemy (85-165) codified astrology as it is known today, incorporating all of the errors that astrologers now try to finesse. After the rise of Christianity, astrology was judged a competing religion. Augustine of Hippo (354-430) pointed out the obvious problem of identical twins who lead different lives and the related problem of "astral twins" – those born on the same date but into different classes. Astrology fell out of favor in the Western Empire while continuing in the East. It took until the time of Geoffrey Chaucer, who mentions it in his Canterbury Tales, for astrology to overcome Church objections and, indeed, become a tool of theology: the stars became messengers of God!

Why do people still believe in astrology? People turn to astrology, as they turn to religion, because they feel overwhelmed by the size, power and complexity of the universe. Having the stars guide their lives as they do ships on the ocean is an attractive alternative for the faint of heart. But, unlike astronomy, there is no science in astrology. It was always magic. Indeed, in 1975 a group of 186 leading scientists, including 19 Nobel laureates, signed a statement called "Objections to Astrology." And although these authorities made no specific critique, Lawrence E. Jerome, in his 1977 book Astrology Disproved,[1] gives at least nine reasons why astrology is no more real that all the gods from Adonis to Zeus:

1. Correspondence is not causation: no matter how powerful a coincidence, there is no necessary causation behind it. Indeed, coincidence is statistically necessary.

2. Statistically, astrology yields no better results than guesswork about the future or anyone's personality or fate.

3. Astrology fails the identical twins and the "astral twins" tests. It has never been demonstrated that being born on the same date affects your fate.

4. Astrology is out of sync with the stars.[2] The star signs astrologers use today are a month off; the sun passes through 13, not 12 constellations; and it does so on different dates and for different durations that traditional astrology claims, based on its 2000-year-old data. For example, the constellations do not all occupy 30 degrees in the sky: the sun passes through Scorpio in seven days, but takes more than a month to traverse Virgo, Taurus and Pisces.

5. Except by coincidence, astrology failed to predict any famous deaths – or to predict significant events such as the 11 September 2001 terrorist attack on the US or the 26 December 2004 tsunami in the Indian Ocean, to name some recent examples.

6. Astrology is based on your time of birth, but if there is any planetary influence at all, shouldn't it be at your conception?

7. Bearing that in mind, there is many times more gravitational influence on a child at birth from the attending doctor than from all the stars and planets combined.

8. Astrology posits a universe in which our fates are pre-determined. Anyone who believes in free will should keep far away from astrology.

9. Astrology is based on a Ptolemaic, earth-centered, universe and so suffered a significant setback when the Copernican, sun-centered, model was adopted. That people still believe in astrology is a testament to a combination of salesmanship and gullibility.

Despite the lack of a causative mechanism – how, exactly, does astrology work? – astrology is believed by millions. But if you really want to see the future, to avoid disaster[3], we should look not to the stars or to planetary conjunctions: we should look to ourselves.

[1] Lawrence E. Jerome, Astrology Disproved, New York: Prometheus Books, 1977. See also the brief critique in The Straight Dope. [2] Reuters: "Astrology May Be Off the Charts," Saturday, January 1, 1995, reported in the Washington Post. [3] The word "disaster" comes from Italian, disastro, meaning "ill-starred," via a Greek combination: δισ- ("away, apart") + αστρον ("star"). So a disaster is an astrological calamity.