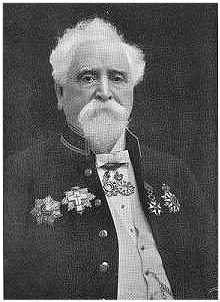 It was also on this date, February 5, 1840, that English engineer and prolific inventor Sir Hiram Maxim was born in Sangersville, Maine. His first engineering work was in America, and he took out patents for such things as gas appliances and electric lamps. Maxim also invented a pneumatic gun, a smokeless gunpowder, a mousetrap, carbon filaments for light bulbs, a gun silencer and a flying machine.

But while visiting the 1881 Paris Electrical Exhibition, so the story goes, a man told him, "If you wanted to make a lot of money, invent something that will enable these Europeans to cut each other's throats with greater facility." It may be for that reason that Maxim is best remembered for the Maxim gun, the first self-acting machine gun, unlike the hand-cranked Gatling gun of American Civil War fame. The Maxim gun was adopted by the British Army in 1889 after an initial rejection, and variations were used by other European militaries.

Maxim was a naturalized British subject and was knighted in 1901 by Queen Victoria for his inventions. He died in London on 4 November 1916. Joseph McCabe, who knew Maxim, says that he was an aggressive Atheist. McCabe collaborated with the inventor on a collection of strong criticisms of religion called Li Hung Chang's Scrap-book (1913).*

Li Hung Chang's Scrap-book is based on a large scrapbook of extracts and clippings reflecting the anti-missionary views of Li Hung Chang (1823-1901). The authors remark that "The Chinese were generally puzzled as to how it was possible for people who are able to build locomotives and steamships to have a religion based on a belief in devils, ghosts, impossible miracles, and all the other absurdities and impossibilities peculiar to the religion taught by the missionaries." Maxim knew the Chinese statesman and general Li Hung Chang (Li Hongzhang) to be just as strong an Atheist as he was himself.

Here’s your Week in Freethought History: This is more than just a calendar of events or mini-biographies – it’s a reminder that, no matter how isolated and alone we may feel at times, we as freethinkers are neither unique nor alone in the world. Last Sunday, July 8, but in 1892, the American Psychological Association […]