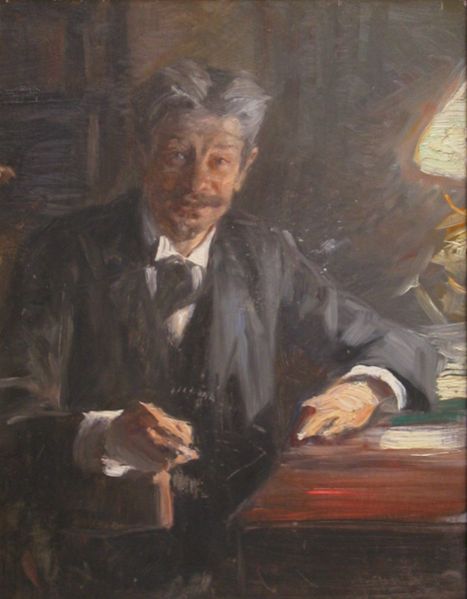 It was on this date, February 4, 1842, that Danish critic and scholar Georg Brandes was born Georg Morris Cohen Brandes in Copenhagen, to a Jewish middle-class family of non-orthodox leanings. As Brandes recalled, “Neither of my parents was in any way associated with the Jewish religion, and neither of them ever went to the Synagogue.”

Over the course of his 85 years, Brandes exercised great influence on Scandinavian and European literature with his brilliant insights and approachable writings, believing literature should be an organ "of the great thoughts of liberty and the progress of humanity." Although born and educated in Denmark, he lived in so many countries the he developed a remarkable a knowledge of the literature of each. He produced influential studies on Henrik Ibsen (1898), Shakespeare (1895–96), Goethe (1915), Voltaire (1916–17), Julius Caesar (1918), Michelangelo (1921), and others.

One of the reasons Brandes changed address so often was his freethinking philosophy: his views forced him to leave Denmark for Berlin, but in 1883 he was persuaded to return to Denmark. Along the way, by the age of 30, Brandes formulated the principles of a new realism and naturalism in literature, a point of view at odds with supernaturalism. When Brandes held a series of lectures in 1871, he defined the Modern Breakthrough and started the movement that would become Cultural Radicalism. These lectures he collected and published between 1872 and 1890 as English as Main Currents in Nineteenth-century Literature (six volumes, Engl. Trans. 1901–05).

Brandes was a member also of the American Academy of Arts and Sciences and the British Royal Society of Literature. Both he and his brother were outspoken agnostics. A friend and correspondent with Friedrich Nietzsche, Brandes once wrote, “It would be as impossible for me to attack Christianity as it would be impossible for me to attack werewolves.” *

Brandes was, at times, an idealist: “The stream of time sweeps away errors, and leaves the truth for the inheritance of humanity.” And, “It is useless to send armies against ideas.” But Brandes's opposition to World War I and religious skepticism made him a controversial figure in his own country and elsewhere. His last years were dedicated to anti-religious polemics and a rejection of what he saw as the hypocrisy of prudish sexuality. “But my doubt would not be overcome,” wrote Brandes. “Kierkegaard had declared that it was only to the consciousness of sin that Christianity was not horror or madness. For me it was sometimes both.”

Georg Brandes died in the city of his birth, Copenhagen, Denmark on 19 February 1927. But he had believed in something greater than himself, saying once, “When I was twelve years old I caught my first strong glimpse of one of the fundamental forces of existence, whose votary I was destined to be for life - namely, Beauty.” It was Brandes, looking over his life-long achievements, who said, “Being gifted needs courage.”

* From the Selected Letter of Friedrich Nietzsche, Brandes to Nietzsche, 23rd November 1888.

John Tyndall (1820) It was on this date, August 2, 1820, that British physicist John Tyndall was born in County Carlow, Ireland, to English Protestant parents. Tyndall left school at the age of 17, with a grounding in basic mathematics and worked for a time as a surveyor in the Irish Civil Service. Higher education […]