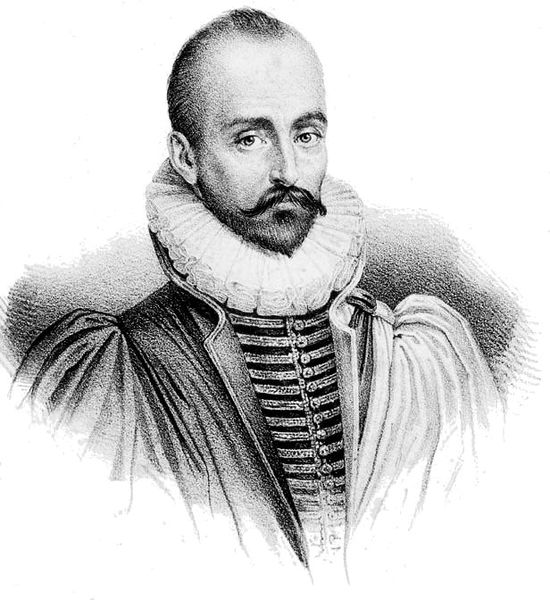 It was on this date, February 28, 1533, that French essayist — indeed, the creator of the essay form in literature — Michel Eyquem de Montaigne was born at his family estate in Château de Montaigne, near Bordeaux, Périgord, in southwest France. His mother's family were conversos, that is, Spanish Jews forcibly converted to Catholicism. His father, a soldier and a lawyer, had Montaigne educated in Bordeaux, where he learned to speak Latin before French, and had a fair knowledge of Greek at the age of six. He was trained in the law and succeeded his father as Councilor of the Bordeaux Parlement. From 1561 to 1563 Montaigne was Royal Councilor and Chevalier of the Order of St. Michael under Charles IX.

Two years after his father's death in 1568, Montaigne resigned and retired to the life of a country gentleman at the family château. There he eventually completed the first books of his famous Essais (1580, augmented 1588), wherein this "literary device for saying almost everything about anything," as Aldous Huxley called the essay form, benefited not only France — his essays were quoted by Shakespeare and imitated by Francis Bacon. As the Essays were published, the 1572 St. Bartholomew's Massacre was a fresh memory in France, so Montaigne professed to be a Catholic. Yet he made some risky statements in his most famous work:

Man is certainly stark mad; he cannot make a flea yet he makes gods by the dozen.

How many things that were articles of faith yesterday are fables today.

Nothing is so firmly believed as what we least know.

Everyone's true worship was that which he found in use in the place where he chanced to be.

To know much is often the cause of doubting more.

Montaigne was a Deist and although once, when he was ill, sent for a priest — "You can at any time get a priest to hold your hands and rub your feet," he remarks in one essay — he may have been a secret Atheist. Considering the mutual slaughter between Catholics and French Huguenots of the time, in which he took a middle ground, if his doubts were deeper than he let on in his writings, he was wise to be circumspect. "It is setting a high value upon our opinions," he wrote, "to roast men and women alive on account of them."

It did not matter what Montaigne professed. And even though his Essays were put on the Catholic Index of Prohibited Books, the Catholic Encyclopedia does not blush to claim him:

He himself, as soon as he became ill, would not send for a priest, and in his last illness did not depart from this custom. Pasquier relates that he "caused Mass to be said in his chamber and when the priest came to the elevation the poor gentleman raised himself as well as he could in bed with hands joined and thus yielded his soul to God." He died therefore in a supreme act of faith.

Montaigne's friend, Étienne Pasquier, believed he was doing the helpless essayist a service by calling the priest: Montaigne's tongue was paralyzed with quinsy. Montaigne died at Château Montaigne on 13 September 1592 at age 59 — but he died as he had lived: a Humanist, believing in God, but with a great disdain for the Church.

Throughout most of his legal life, his religious opinion can be said to have been Unitarian. Said Holmes, “the secret of my success is that at an early age I discovered that I was not God.”