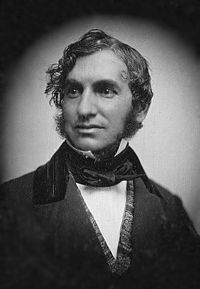 It was on this date, February 27, 1807, that the first American professional poet, Henry Wadsworth Longfellow, was born in coastal Portland, Maine. Although his father steered him toward a legal career, Henry was too in love with language to turn down the newly founded chair in modern languages at Bowdoin College. He was only 19 when it was offered and he accepted, in part because he would be allowed to travel to further his education. From 1826-1829 he traveled in Spain, Italy, France, Germany, and England, not only to meet his academic peers, but to meet the people of the inns and cottages.

It is true that he met his first wife, Mary Storer Potter, at church. Longfellow married her in 1831, settling in to translate and write travel essays before taking a professorship at Harvard in 1834. While abroad, his wife died and he memorialized her in "Footsteps of Angels" (1838). Other works of that period include Hyperion (1839, a romantic novel) and The Spanish Student (1840, a drama in five acts).

In 1845 Longfellow married Frances Appleton. He published "Evangeline," a narrative poem from an outline by his friend, Nathaniel Hawthorne, in 1847. Longfellow's literary output, hampered by his teaching duties at Harvard until his resignation in 1854, swelled with such later works as "The Song of Hiawatha" (1855), "The Courtship of Miles Standish" (1858), "Paul Revere's Ride" (1860), "Tales of a Wayside Inn" (1863), a translation of Dante's Divine Comedy (1865-67) and Christus: a Mystery (1872), a trilogy dealing with the beginnings of Christianity.

Although Longfellow is typically described as a Christian, his fellow poet and friend William Dean Howells writes, "I think that as he grew older his hold upon anything like a creed weakened, though he remained of the Unitarian philosophy concerning Christ"* — that is, he denied the divinity of Christ. Longfellow died in Cambridge on 24 March 1882 at age 75 — probably a Rationalist, as Howells notes that the poet "did not latterly go to church."**

* William Dean Howells, Literary Friends and Acquaintances, 1901, p. 202. ** Ibid. You can read the full text of many of Longfellow's poems at this link.

Wrote Burns in "Epistle to Rev. John McMath," "But twenty times I rather would be // An atheist clean, // Than under gospel colours hid be // Just for a screen."