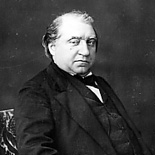 It was on this date, February 27, 1823, that French scholar Joseph Ernest Renan was born in Trier, Brittany, to a Breton father and a Gascon mother. He lost his father at age five and only his industry and the help of his sister Henriette (who was even more deeply skeptical than he) made him the greatest Orientalist of his day—that is, an expert on Near Eastern and Far Eastern societies and cultures, languages, peoples and history. Destined for the priesthood, and having taken minor orders, Renan gave up those studies (6 October 1845) after reading German philosophy. He remained a Pantheist throughout his life.

His essay on Semitic languages won Renan the Volney Prize and won him a Government mission to the East, on which his sister accompanied him. Henriette died and Renan returned to become professor of Hebrew, Syriac, and Chaldaic at Paris University. But he angered the clergy and lost this position by publishing his Life of Jesus (Vie de Jésus, 1863) — which, nevertheless, sold 300,000 copies in France alone and was translated into nearly every European language. In it, Renan wrote:

None of the miracles with which the old histories are filled took place under scientific conditions. Observation, which has never once been falsified, teaches us that miracles never happen but in times and countries in which they are believed, and before persons disposed to believe them. No miracle ever occurred in the presence of men capable of testing its miraculous character.*

Although Renan was a Pantheist with Agnostic tendencies, he would still refer to "God" and the divinity (in the Romantic sense) of Jesus in his writings. His work helped to enlighten and secularize France by destroying the supernatural idea of Jesus. He won back his chair at Paris University in 1871, due in part to brilliant works on early Christianity, but held his tongue against criticizing religion out of respect for the royalist Weltanschauung.

While decrying his skepticism with the vehemence of the intellectually vulnerable, even his detractors had to admit, "Renan's personal life was irreproachable."** Renan died in Paris on 2 October 1892 at age 69. Ernest Renan, who did not believe in a future life, once said, "I know that when I am dead nothing of me will remain."†

* Ernest Renan, Life of Jesus, 1863. A full-text translation of this work, dedicated to his late sister, can be read at this link. ** Philip Schaff, "Preterist Commentaries by Futurists," in "What Others Have Said," n.d., at this link. † Henriette Psichari (ed.), Oeuvres complètes de Ernest Renan, 1947-1961.