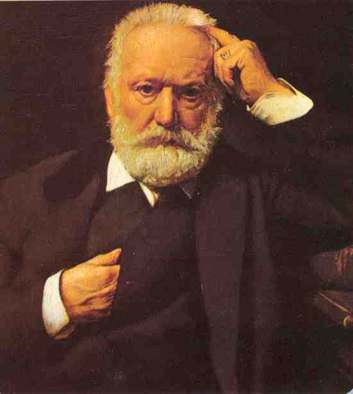 It was on this date, February 26, 1802, that French Romantic novelist, poet and dramatist Victor-Marie Hugo was born in Besançon, the son of an officer in Napoleon's army and a Mason. His parents, both atheists, divorced, and Hugo, who was never baptized, was reared by his mother. She took the family to Italy for two years when Hugo was 5, returning him to be educated in France — under a defrocked priest named La Rivière. He began early composing romantic poetry and translated Vergil. His first published poetry collection, Odes et Poésies Diverses (1822), earned him a pension from King Louis XVIII. His first novel, Han D'Islande (Hans of Iceland, 1823), appeared at first anonymously, but showed the influence of Sir Walter Scott.

Hugo married Adèle Foucher in a Catholic ceremony in 1822 and in the 1820s came under the influence of liberal writers, and though his political opinions sometimes wavered — he wrote royalist odes when they were in power, but embraced the republicans in their days — he was always anti-clerical. "Every step which the intelligence of Europe has taken has been in spite of the clerical party,"[1] he said. Though he often prayed, Hugo never went to church. "There is in every village a torch: the schoolmaster," Hugo noted, "and an extinguisher: the parson."[2]

Among Hugo's best-known works are The Hunchback of Notre Dame (Nôtre-Dame de Paris, 1831) and Les Misérables (1862), which have been embraced in many theatrical and film versions over the years — most notably the 1980 musical version of "Les Mis" by Schönberg and Boublil (produced London 1985, New York 1987: two Tony Awards). Hugo was elected in 1841 to the Académie Française.

Hugo was elected to the Legislative Assembly and the Constitutional Assembly following the 1848 revolution and the formation of the Second Republic. He led soldiers who stormed the barricades when workers rioted. Due in large part to the Church's indifference to the plight of the working class under the monarchy, which crushed their opposition, Hugo evolved from non-practicing Catholic to a Voltairean Deism. He substituted "distant deference for open hostility," according to biographer Henri Guillemin.[3] But although Hugo believed Catholic dogma outdated and dying, he would not attack the institution. After the 1851 coup d'état by Napoleon III, Hugo believed his life in danger on account of his apostasy: he fled France for Brussels, then Jersey (he returned in 1870).

The soldier and the priest
are the worst enemies
of humanity, for
if the soldier kills, the priest lies.[4]

Although he remained somewhat superstitious, Hugo's Rationalism can be found in poems such as his 1860 poem about religious fanaticism, "Torquemada," his violently anti-clerical 1878 poem, "The Pope," his 1880 poem denying the usefulness of churches, "Religions and Religion," and two posthumous poems, "The End of Satan" and "God" (1886, 1891), in which he represents Christianity as a griffin and Rationalism as an angel. When his son Charles died in 1871, Hugo saw that he was buried without cross or priest; two years later, on the death of his other son, François-Victor, he made the same stipulation. To a census-taker, who asked him in 1872 if he was a Catholic, Hugo replied, "No. A Freethinker." Hugo predicted that Christianity would soon disappear, but men would still believe in "God, Soul, and Responsibility."[5]

Hugo died in Paris on 22 May 1885 at age 83. He was given a national funeral and buried in the Panthéon. The church was outraged that Hugo had demanded that the crucifix be removed, but Hugo had written in his will (1860), "no priest will attend to my interment" and "I give fifty thousand francs to the poor. I desire to be carried to the cemetery in their hearse. I refuse the oration of all the Churches."[6]

It was Victor Hugo who said, "Sacrificing the earth for paradise is giving up the substance for the shadow."[7]

“Is it not a fact that in the very countries in which the Church holds an undisputed sway and no freedom of thought is tolerated, a very much lower standard of morality prevails?”