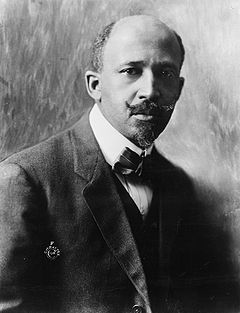 It was on this date, February 23, 1868, that U.S. historian and black civil rights leader W.E.B. Du Bois was born William Edward Burghardt Du Bois in Great Barrington, Massachusetts. Born into a U.S. of newly emancipated black slaves, Du Bois helped to realize the unfulfilled promise of equality. After attending the historically black Fisk University in Nashville, Tennessee, Du Bois graduated Harvard University in 1890, and after studying at the University of Berlin (1892-1894), he returned to earn his doctorate in history at Harvard in 1895. His dissertation was "The Suppression of the African Slave-Trade to the United States of America, 1638-1870."

He published his most famous essay collection, The Souls of Black Folk, in 1903. Over the next 60 years, Du Bois helped to create and guide the National Association for the Advancement of Colored People (NAACP) — and later the Pan-African Congress — and edited the NAACP's journal, Crisis, for a quarter century. Du Bois's work for international peace in the 1950s, and favorable statements about the USSR, led to government censure and indictment (later dismissed) under the Foreign Agents Registration Act of 1938. He thumbed his nose at McCarthyism by joining the Communist Party — but only in 1961.

My religious development has been slow and uncertain. ... By the time of graduation, I was still a 'believer' in orthodox religion, but had strong questions which were encouraged at Harvard. In Germany I became a freethinker and when I came to teach at an orthodox Methodist Negro school I was soon regarded with suspicion, especially when I refused to lead the students in public prayer. ... I flatly refused again to join any church or sign any church creed. From my thirtieth year on I have increasingly regarded the church as an institution which defended such evils as slavery, color caste, exploitation of labor, and war.[1]

Du Bois was not religious in any traditional sense; indeed, he was something of an anti-cleric. ... Du Bois generally regarded institutional religion as a bastion of unreason and reaction that buttressed the status quo. He was a humanist and a rationalist, not a theist or a supernaturalist. Anti-rational dogma repelled him, and he ceased participating in organized worship as a young adult.[2]

Du Bois wrote an essay called "On Christianity," published posthumously, in which he contrasted white Christianity with black Christianity:

White Christianity has in the twentieth century been curiously discredited. First, it is faced by the fact of the [First] World War. Here in the twentieth century of the Prince of Peace, the leading nations representing His religion have been murdering, maiming, and hurting each other on a scale unprecedented in the history of mankind. Again, into the white church of Christ, race prejudice has crept to such an extent it is openly recognized. ...

The theology of the average colored church is basing itself far too much upon "hell and damnation." ... We are still trained to believe a good deal that is simply childish in theology. ... Our present method of periodic revival [involves] the hiring of professional and loud-mouthed evangelists and reducing people to a state of frenzy or unconsciousness. ...[3]

Du Bois died a citizen of Ghana on 27 August 1963 at age 95. It was W.E.B. Du Bois who noted, toward the end of his life, "Half the Christian churches of New York are trying to ruin the free public schools in order to replace them by religious dogma."[4]

This Week in Freethought History (April 21-27)

Read about religion vs. science in “Inherit the Wind,” “In God We Trust” on US coins, Shakespeare and God, churches vs. libraries, godless DNA described, H.C. Bastian, General Grant vs. theocracy, Mary Wollstonecraft vs. sexism and more …