Christians and the Diocletian Persecution (303) 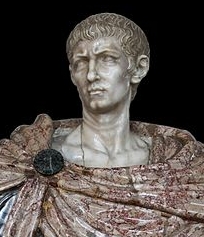 It was on this date, February 23, 303 CE, that the second of only two general persecutions of Christians in the Roman Empire began under the Emperor Diocletian and lasted two years. In spite of the accounts in Sunday School parlayed as fact, and as noted elsewhere, even Catholic historians can document only about a hundred who gave up their lives for their faith — out of a Christian population of 20,000 in Rome. The rest, it turns out, voluntarily abjured the faith and burned a few grains of incense for the Emperor.

Gaius Aurelius Valerius Diocletanius (c. 243-316), a Roman soldier with a Greek name (Διοκλες or Diokles), became Emperor on 20 November 284 CE, on the death of Numerian and at the hands of the opposing Persian army, at about the age of 41. He appointed Maximian as co-regent to administer the western part of the Empire (after the fortuitous death of Carinus) while Diocletian administered the eastern part from Nicomedia; a third and fourth, Constantius and Galerius, beholden to the first two, completed the Tetrarchy. Although Christianity was illegal in the Empire, under Diocletian the practice was tolerated so long as it did not threaten imperial sovereignty. The strife-torn and divided Empire was in need of Diocletian's steadying hand and economic, social, military, and religious reform.

It was this religious reform that affected the Christian cult of the fourth century. The earlier persecution, under Emperor Decian, had ended more than two generations before. Christians had since enjoyed 53 years of relative peace, 20 of those years under Diocletian himself. They had been allowed to build a church near the imperial palace. Diocletian's wife, Prisca, and daughter, Valeria, became Christians. But according to Bishop Eusebius, the clerics and laity "fell into laxity and sloth, and envied and reviled each other, and were almost, as it were, taking up arms against one another ... casting aside the bond of piety...."*

The Christian apologist Lactantius notes** that Diocletian became offended when he discovered numerous Christian officials of the Court making the sign of the cross at pagan sacrifices, which Diocletian considered insolence. Consequently, he ordered the destruction of their church. But the Christians further insulted their Emperor by tearing down his posted edict. Indeed, when fire was set to the palace, the Christians were strongly suspected.

It was then that Diocletian, who had a strong feeling of imperial dignity, issued a series of decrees ordering the destruction of churches and the surrender of copies of the Scriptures. He further demanded that all must offer sacrifice to the gods or certify that they had sacrificed. Popular literature represents that up to 40,000 martyrs were made throughout the Empire, but Catholic historians Louis Duchesne (a Monsignor), Hippolyte Delehaye (a Jesuit) and Albert Ehrhard (a professor) find genuine martyrs numbering 20 or fewer in the whole Empire, with only three at Rome (which was then no longer the capital).†

The truths about the Diocletian Persecution are that many Christians brought it on themselves by defying the Emperor, that a tiny number believed so strongly that they died for their faith, that the vast majority either went into hiding, bought fraudulent certificates that they had made the required sacrifice, or — in the overwhelming majority of cases — abjured the faith. In addition, after the persecution ended in 305, Diocletian retired, and within ten years Christianity became legal under Emperor Constantine. Those looking with nostalgia on the faith of their fathers take note: it was never very tough being a Christian. Instead, it soon became deadly not to become one.

J.B.S. Haldane (1892) It was on this date, November 5, 1892, that British biochemist and geneticist John Burdon Sanderson Haldane was born in Scotland. Educated at Eton and Oxford, J.B.S. Haldane was not only broadly knowledgeable in science, but he had a well developed social conscience. This led him to follow Marxism for a time […]