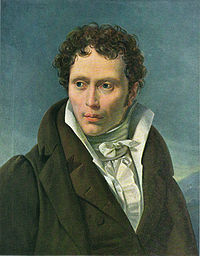 It was on this date, February 22, 1788, that the "philosopher of pessimism," Arthur Schopenhauer, was born into a wealthy family of Danzig (now Gdańsk), on the Baltic coast of Poland. In Schopenhauer's day, Danzig was part of German-speaking Prussia. His business education was cut short by the death of his father, leaving Schopenhauer with a fortune and the leisure to study philosophy. He traveled much, earned a doctorate at Jena, and failed to surpass the popularity of his rival, Georg W.F. Hegel.

Schopenhauer gave up on academia, never married — he believed woman were biologically suited for service, not equality — and retired to write his philosophical works. In 1819, the crusty philosopher drew attention throughout Europe for his famous work, The World as Will and Idea. He followed Immanuel Kant to some extent, and reacted against idealism — which is understandable for a man who lived through his father's suicide, his mother's disdain, and the failure of the German and Austrian revolutions of 1848. Schopenhauer believed "will" is the driving force of life, a life which itself is miserable and pointless. He believed the only respite from the wretchedness of existence was the temporary alleviation of art.

Schopenhauer also followed Kant in his skepticism about finding logical proofs for the existence of God. For example, he wrote in A Few Words on Pantheism (1851):

The chief objection I have to Pantheism is that it says nothing. To call the world God is not to explain it; it is only to enrich our language with a superfluous synonym for the word world.

Whether one makes an idol of wood, stone, metal, or constructs it out of ideas, it is all the same; it is idolatry, whenever one has a personal being in view to whom one sacrifices, whom one invokes, whom one thanks.[1]

Almost every Spaniard in days gone by used to look upon an auto-da-fé as the most pious of all acts and one most agreeable to God. A parallel to this may be found in the way in which the Thugs (a religious sect in India, suppressed a short time ago by the English, who executed numbers of them) express their sense of religion and their veneration for the [Hindu] goddess Kali; they take every opportunity of murdering their friends and traveling companions. ... The power of religious dogma, when inculcated early, is such as to stifle conscious, compassion, and finally every feeling of humanity.[2]

Needless to say, Schopenhauer was no Christian. "The fruits of Christianity," he said in the same "Dialogue," "were religious wars, butcheries, crusades, inquisitions, extermination of the natives of America, and the introduction of African slaves in their place."[3] And his view that religion is inimical to enlightenment, was similarly manifest:

Religions are like glowworms; they shine only when it is dark. A certain amount of general ignorance is the condition of all religions, the element in which alone they can exist. And as soon as astronomy, natural science, geology, history, and knowledge of countries and peoples have spread their light broadcast, and philosophy finally is permitted to say a word, every faith founded on miracles and revelation must disappear.[4]

Arthur Schopenhauer died on 21 September 1860, "a lonely, violent and unbefriended man, who shared his bachelor's existence with a poodle," according to Henry Alphern's Outline History of Philosophy. It was Arthur Schopenhauer who said, "Religion has always been and always will be in conflict with the noble endeavor after pure truth."[5]

[1] Rufus K. Noyes, Views of Religion, 1906. [2] Arthur Schopenhauer, "Religion — A Dialogue," reprinted in The Works of Schopenhauer, edited by Will Durant, 1955, pp. 467-468; quoted in James A. Haught, 2000 Years of Disbelief, 1996. NB: Wikipedia says, “Thugs were an organized gang of professional robbers and murderers. Thuggee was a secret cult whose members, both Muslims and Hindus, worshipped Mother Kali, the goddess of destruction. They operated as gangs of highway robbers, tricking and later strangling their victims. During the 1830s, the Thugs were targeted for eradication by Governor-General of India, William Bentinck and his chief captain, William Henry Sleeman.” [3] Ibid., p. 490. [4] Ibid., p. 485. [5] Ibid., p. 474.