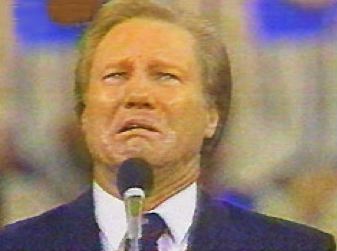 It was on this date, February 21, 1988, that America's current leading television evangelist, Jimmy Swaggart, resigned from his ministry in a tearful, televised confession. Two years earlier, Swaggart had begun attacking rivals Jim and Tammy Faye Bakker, exposing Bakker’s sexuality infidelity while traveling. As it turns out, the opportunity was secretly arranged by Swaggart himself, but nobody will take such bait unless hungry to begin with.

Another evangelist he attacked, Marvin Gorman, retaliated against Swaggart by secretly investigating Swaggart and – lo! – found that his accuser lived in a glass house himself. Swaggart was found to have solicited a prostitute for sex. Swaggart was removed from the ministry by the Pentecostal Assemblies of God Church.

Sexual hypocrisy is hardly new to the religion industry, especially among evangelists who preach purity and practice infidelity – infidelity, at least, to their creed or congregation or consort. In our own time, as far back as the 1920s, Canadian-born evangelist Aimee Semple McPherson (1890-1944), founder of the Foursquare Church, first tried to fake her own death, then claimed she had been kidnapped, so that she could frolic with a lover, reportedly Kenneth G. Ormiston, a broadcast engineer. The ensuing scandal was hard on her: McPherson died in 1944 from an accidental overdose of barbiturates.

Radio evangelist and part-time conspiracy theorist Billy James Hargis (1925-2004) formed the American Christian College in 1971 to teach fundamentalist Christian principles. Claims that Hargis had had sex with four males and one female student coincided with his resignation from the College due to “health problems.” But one couple that Hargis married claimed to have found out on their wedding night that he had deflowered both of them. Later on, members of Hargis' youth choir, the "All American Kids," accused Hargis of sexual misconduct, as well. American Christian College closed down in 1977.

American Pentecostal evangelist and self-proclaimed "seeing prophet" Lonnie Frisbee (1949-1993) was a key figure in the Jesus Movement and self-styled “hippie preacher” in the late 1970s. Although condemning homosexuality as a sin, Frisbee privately socialized as a gay man both before and during his evangelism career. He co-founded two churches before his extracurricular behavior caught the attention of his congregation and he was fired. Frisbee died of AIDS in 1993.

American evangelist Bob Moorehead, pastor of the Overlake Christian Church, was arrested in July, 1996, on a charge of indecent exposure in a public restroom in Daytona Beach, Florida. Allegations of sexual molestation were uncovered, in which several men accused Moorehead publicly of inappropriately touching them, often before weddings or baptisms.

British evangelist Roy Clements achieved leadership in Britain's Evangelical Christian movement for two decades. In 1999, the prolific Christian author, who apparently never heeded Leviticus, revealed he was in a homosexual relationship with another man, resigned his pastorship, and separated from his wife.

British televangelist Douglas Goodman, with his wife Erica, were pastors of Victory Christian Centre in London, one of the largest in the UK. But in 2004 Douglas was arrested an imprisoned for sexual assaults against four members of his congregation, along with financial abuse at his church.

Ted Haggard was pastor of the New Life Church in Colorado Springs, Colorado and was the president of the National Association of Evangelicals. In 2006 it was alleged that Haggard had been regularly visiting a male prostitute, a liaison that Haggard later admitted just before resigning both positions. Less than three years later, Haggard admitted to a second homosexual relationship with a male church member.

Southern Baptist church leader George Alan Rekers who, as a practicing psychologist, has testified in court that homosexuality is sinful and destructive, and against parenthood by gay and lesbian people. So it was uncomfortable for him when in April 2010 he was photographed at Miami International Airport returning from an extended overseas trip with a twenty-year-old "rent boy," or gay male prostitute. Rekers, of course, denied having sex with the man, but subsequently resigned from the board of the National Association for Research & Therapy of Homosexuality.

The list is seemingly endless, and this is not to mention the sexual scandals involving Roman Catholic priests with the children in their charge, for which the Catholic church is paying heavily in fines, settlements and attrition of personnel.

As for Jimmy Swaggart, three years after the original scandal blew up (1991), he was again implicated in a sex scandal involving a prostitute. No longer trusted with a large congregation, Swaggart is currently a freelance preacher.