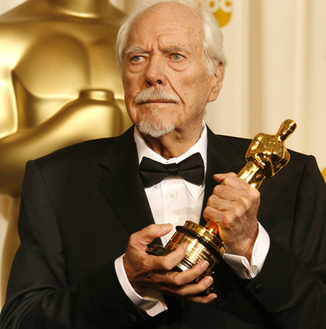 It was on this date, February 20, 1925, that American film director Robert Altman was born in Kansas City, Missouri, the son of a Mayflower descendant mother and an insurance salesman father. Altman was educated in Jesuit schools prior to joining the Army at the age of 18, but apparently this didn’t yield the outcome the Roman Catholic priests had hoped: he lost his religion soon after joining the military. During World War II, Altman flew over 50 bombing missions in Borneo and the Dutch East Indies. But when it came time to join the reserves, he declined – although the military put some pressure on him – because he knew he would be sent to serve in the Korean War.

That was the very same war and military he lampooned in his 1970 film M*A*S*H, based on the Richard Hooker novel about field hospital personnel trying to keep their sanity in an insane war. In fact, in 2004, the avowedly nonpolitical Altman told an interviewer, “I have been against all of these wars ever since.” The interviewer observes, “… it's worth noting that by the age of 20 this whistle- blower had resisted two of the most powerful institutions - church and army, both. He is an atheist.”

Altman’s Lifetime Achievement Award was for “a career that has repeatedly reinvented the art form and inspired filmmakers and audiences alike.” Was Altman’s atheism the reason for 7 Oscar nominations and not a single win? There may have been other reasons, including his personality and personal habits, but his list of memorable films is impressive: Gosford Park (Picture, Director, 2001), Short Cuts (Director, 1994), The Player (Director, 1993), Nashville (Picture, Director, 1975), McCabe & Mrs. Miller (1971), M*A*S*H (Director, 1970).

As often happens with atheists, believers seldom take them seriously, even when they are on the record as an “avowed atheist.” “One time we almost got thrown out of a restaurant,” writes biographer Mitchell Zuckoff,

Bob and I were discussing religious things. [Altman] was three sheets to the wind and he got a little loud. The people next to us left and we didn’t realize that we had driven them away. We went up to pay the bill, and the woman said, “You know of course that you ran those people out of here because of your loud talk about religion.” And I said, “No, I didn’t know that. I’m really sorry about that.” Bob made some comment to the effect of, “Who cares? If they don’t like it, it’s too bad.” His take on religion was just being argumentative. It’s not that he had a strong opinion one way or another, he just wanted to argue. I think he would have liked to be a practicing atheist, but nah, he wasn’t.*

Altman died an atheist in Los Angeles of complications from leukemia on 20 November 2006. It was Robert Altman who quipped, “What's a cult? It just means not enough people to make a minority.”**

Wollstonecraft argued that to obtain social equality society must rid itself of the monarchy as well as the church and military hierarchies.