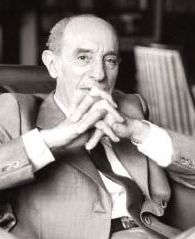 It was on this date, February 20, 1912, that the French novelist largely known for two famous works, The Bridge Over the River Kwai (1952) and Planet of the Apes (1963), was born Pierre-François-Marie-Louis Boulle in Avignon. Pierre Boulle was baptized and raised as a Roman Catholic, but would later fall away from his faith. He studied at the prestigious École supérieure d'électricité where he received an engineer's degree in 1933. Boulle enlisted with the French army during World War II and served as a secret agent helping the resistance movement in China, Burma, and French Indochina. He was captive for a time in Thailand. After the war, Boulle was made a chevalier of the Légion d'Honneur and decorated with the Croix de Guerre and the Médaille de la Résistance.

Boulle’s wartime experiences informed his narrative in the fictionalized but true-to-life Bridge Over the River Kwai (Le Pont de la rivière Kwaï) , which was filmed by David Lean (as The Bridge on the River Kwai). The 1957 film won seven Oscars the following year, including a Best Screenplay Based on Another Medium award for Boulle.* In the book and film, the brutality of war is unveiled in a struggle of wills between a British officer as a POW under a Japanese prison camp warden in Burma during that same war.

The Bridge Over the River Kwai was meant as a spoof. Lt. Colonel Nicholson, the stiff British commander, is imprisoned in a POW camp and he and his officers and men are forced to build the “Death Railway” across the Kwai River to complete a railroad connection between Bangkok and Rangoon. Standing on principle, and the Geneva Convention, Nicholson refuses to allow his officers to work and is tortured for his resistance by the Japanese Colonel Saito. Eventually the two officers develop a mutual respect and Nicholson builds a superior-quality bridge, only to have it blown up by General Command. In real life, a British snob such as Nicholson would almost certainly have been fragged by his own men. His actions, presumably based on pride (perhaps even white pride or at least Western pride), would be indistinguishable from collaboration. Nicholson’s character cannot be divorced from the prevailing superiority felt by many Christian Westerners toward the heathen “yellow races.”

Planet of the Apes (La planète des singes, translated by Xan Fielding), also a satire, is premised on a group of astronauts crash landing on a distant planet where apes are ascendant and humans are jungle-dwelling primitives, used for experiments and trained to do tricks. The satire in the role reversal includes a deep poke at religion as the astronaut portrays an Enlightenment intellect confronting an “ape” culture of ingrained religion and superstitious beliefs. In this science-fiction world, free thought (or Freethought) is a crime and heaven help anybody who claims the truth of evolution.

* The story is a little more complicated than this: According to Wikipedia, Boulle himself won the award despite not having written the screenplay and, by his own admission, not even speaking English. (He gave what is said to be the shortest acceptance speech in Academy Award history, the single word "Merci".) Boulle had been credited with the screenplay because the film's actual writers, Carl Foreman and Michael Wilson, had been blacklisted as communist sympathizers, whereas Pierre Boulle was neither a Socialist nor a Communist. The Motion Picture Academy added Foreman's and Wilson's names to the award in 1984.