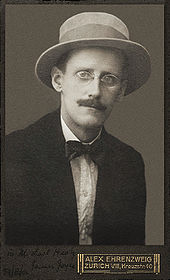 It was on this date, February 2, 1882, that Irish author James Joyce was born James Augustine Aloysius Joyce in Dublin, the son of a Roman Catholic mother and an underachieving father. James Joyce's early education was from Irish Jesuits, who (he said) taught him to think straight — but he rejected their religion while very young, considering it "black magic." "I confess that I do not see what good it does to fulminate against the English tyranny while the Roman tyranny occupies the palace of the soul," said Joyce. "For me there is only one alternative to scholasticism, scepticism."

Look here, Cranly, he said. ... I will not serve that in which I no longer believe, whether it call itself my home, my fatherland, or my church: and I will try to express myself in some mode of life or art as freely as I can and as wholly as I can, using my defence the only arms I allow myself to use - silence, exile, and cunning."*

Joyce went on to distinguish himself with his novel Ulysses** (1922). Later still, Finnegan's Wake (1939), Joyce's most revolutionary work, was a critical and popular disappointment. Joyce died on 13 January 1941, — never witnessing the subsequent popularity of Finnegan's Wake, which was received by some as a masterpiece, by others as incomprehensible. In the "first draft" of his novel Portrait of the Artist as a Young Man, called Stephen Hero, Joyce has Stephen muse, "He comes into the world God knows how, walks on the water, gets out of his grave and goes up off the Hill of Howth. What drivel is this?"

John Lennon (1940) It was on this date, October 9, 1940, that John Winston Lennon was born in Liverpool, England. John Lennon had working-class roots, but went to art school and loved popular music. Having gotten together with songwriting collaborator Paul McCartney, who introduced Lennon to George Harrison, and a drummer to be named later […]